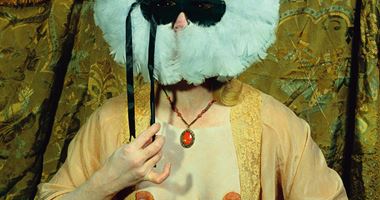 Although Cindy Sherman acts as her own model, stylist, hairdresser, and photographer in her photographs, the American artist's works are hardly self-portraits.

Sherman adopts different identities each time, fashioning herself as various characters and archetypes. Through the staged artifice of her photographs, Sherman conveys femininity and identity as unfixed constructions determined by social and cultural norms.

After graduating from the State University of New York at Buffalo in 1976, Cindy Sherman quickly attracted attention for her photography series entitled 'Untitled Film Stills' (1977–1980).

Mimicking the aesthetics of 1950s and 1960s Hollywood films, B-movies, and European arthouse films, the 69 black-and-white photographs are fictitious stills from movies that never existed. In the images, Sherman 'plays' stereotypical female characters, such as a housewife in Untitled Film Still #35 (1979) or a young girl just arrived in the big city in Untitled Film Still #21 (1978).

Sherman's interest in the visual codes of femininity—with attention to fashion, makeup, demeanour, and stereotypes—continued through 'Centerfolds', a series of 12 horizontal prints commissioned by Artforum in 1981.

In reference to the centrefolds found in men's magazines and a pervasive history of consuming the female body through images, the artist photographed herself in passive positions, either lying or kneeling. The images were interpreted by some critics as showing women in vulnerable situations, which led Artforum to reject them. Sherman directly followed the series with her four 'Pink Robes' photographs, for which she posed as a woman covering her body with a pink robe and gazing challengingly at the camera, refusing objectification.

Sherman's photography considers the relationship between identity and mass media. Her work as such has been associated with the Pictures Generation, a group of young American artists from the 1970s and 1980s that includes Louise Lawler, Sherrie Levine, Robert Longo, Laurie Simmons, and Richard Prince.

Questioning notions of authorship, the Pictures Generation artists were inspired by French cultural critics and philosophers like Michel Foucault, Julia Kristeva, and Roland Barthes, the last of whom famously declared 'The Death of the Author' in his 1967 essay. Barthes denied the possibility of original authorship, arguing that any creative output is, in fact, a derivative of others' work. Sherman—acting as both the author and subject throughout her practice—similarly does not see her artworks as images of herself, but instead as reproductions of ideas and archetypes.

Reacting to a mounting contemporary art market demand for her photographs, from the mid-1980s some of Sherman's photographic series took a darker turn, with the artist increasingly disguising herself to the point of unrecognisability.

The images in 'Fairy Tales' (1985) and 'Disasters' (1986–1989), for instance, are inhabited by gory remnants of a violent crime or the aftermath of unknown disasters, featuring body parts, vomit, and blood.

Part of the 'Disasters' series, Untitled #169 (1987), features a close-up of a man's head lying on the ground, surrounded by snow and shattered glass. The man, though completely unrecognisable, is Sherman, transformed with prosthetics and wigs. Conversely, in 'Sex Pictures'—a later series, from 1992—the artist is physically absent from the photographs and instead populates the images with anatomical mannequins arranged into vulgar and disturbing sexual positions.

Made around the same time as 'Disasters' and 'Sex Pictures', the series 'History Portraits' (1988–1990) saw Sherman borrowing from European portraiture traditions to cast solemn-looking figures in absurdly artificial settings.

Untitled #228 (1990) is a full-length portrait of Sherman dressed as Judith, a biblical figure who beheaded the Assyrian general Holofernes to save her people, and a popular subject in Renaissance and Baroque paintings. While Sherman composed the portrait with references to Western art historical conventions—such as the use of textiles to adorn the background—she also willingly discloses the artificiality of the scene: Holofernes' head, upon closer inspection, is more like a Halloween mask than a real head; the fabrics, though enhanced through the camera, are cheap buys from thrift stores.

In another image, Untitled #216 (1989), the artist's awkwardly attached prosthetic breast reveals the portrait as a staged scene. Through her undisguised use of props and prosthetics, Sherman exposes the artificiality of identity construction; the ideas of identity, just like portraits, are always mediated.

In more recent years, Sherman has confronted the obsession with youth in contemporary culture. 'Society Portraits' (2008) shows her as various women of wealth, whose heavy make-up and surgical enhancement hint at attempts to conceal and slow down the process of ageing. In another series from 2016, entitled 'Flappers', Sherman portrays ageing movie stars styled as they had been in their youth, criticising the impossible demands on women to maintain their youthful appearances.

Since 2017, Sherman has used her Instagram account to upload portraits of herself manipulated through various face-tuning apps. Warping her image into uncanny, fantastical compositions, Sherman employs the posts as a means to draw attention to the dissociative nature of social media, a contemporary iteration of the modern fracturing of identity that Sherman has pursued throughout her career.

Exhibiting since the 1970s, Cindy Sherman has held numerous solo and group exhibitions around the globe.

Artists are speaking out against a US Supreme Court decision that would deny millions of women access to abortion by over turning Roe v. Wade.

Read More Ocula News Who Are the Most Followed Artists on Instagram? Tokyo, 10 February 2022

Takashi Murakami cracked 2.5 million followers this week, but he's a long way behind the most popular artist on the platform.

In Basel this week? Don't miss Close Up at Fondation Beyeler. ⁠⁠

There is something profoundly uncanny about seeing Cindy Sherman in person for the first time. When she greets me at the door of her SoHo studio one afternoon in April, casually dressed and wearing no

Read More Related Press Cindy Sherman Takes Selfies (as Only She Could) on Instagram 10 August 2017, The New York Times

Media hacks have Twitter, excitable teenagers have Snapchat and middle managers have LinkedIn, but in the art world, the social network of choice remains Instagram, where all the world's beauty is gri

Monika Sprüth and Philomene Magers are matriarchs of contemporary art. Their gallery currently has spaces in London, Berlin, and Los Angeles, but it began in the later 1990s when Sprüth mentored Mager

Sign up to be notified when new artworks and exhibitions by Cindy Sherman are added to Ocula.
Sign Up Login