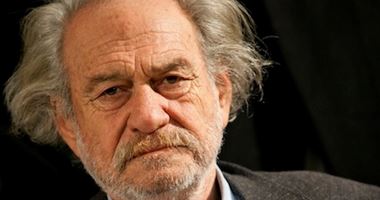 Born in Piraeus, Greece, Kounellis moved to Rome in 1956. He studied at the Art College in Athens and then in Rome, where he studied at the Accademia di Belle Arti. There he was particularly influenced by the non-figurative painting of Alberto Burri, Luciano Fontana, Jackson Pollock and Franz Kline.

During the late 1960’s Kounellis began to use live animals in his art (one of his best-known works included 11 horses installed in a gallery). In 1967, Kounellis joined the Italian ‘Arte Povera’ movement, which involved using found objects and spaces. Gradually Kounellis moved to preferring historical (mostly industrial) sites to gallery environments for his exhibitions.

Kounellis's work has developed as a spectacular mixture of painting, collages and the staging of installations, ‘environments', performances and theatrical shows, designed to express the tensions and alienation of contemporary society, and the multiplicity, obscurity and fragmentation of its language. As a major conceptual artists of our time, Kounellis’ work is to be found in the permanent collections of numerous major international art museums.

He has recently been honoured with exhibitions at the Museum of Cycladic Art, Athens, Greece (2012); the Museum of Contemporary Art, Herning, Denmark (2009); the Neue Nationalgalerie, Berlin, Germany (2007); the MADRE Museo d'Arte Contemporanea Donnaregina, Naples, Italy (2006); and the Galeria Nazionale d’Arte Moderna, Rome, Italy (2002). Earlier on, the Museo Nacional Centro de Arte Reina Sofía held an exhibition of his work in Madrid in 1997. In 1994, Kounellis installed a comprehensive selection of works from the past thirty years in a boat called Ionion and docked this floating retrospective in his home town the port of Piraeus.

In 1989, the artist was given an exhibition at the Espai Poblenou in Barcelona. Kounellis took part at the Venice Biennale several times as well as Documenta 5 in 1972 and Documenta 7 in 1982. Between 1993 and 2001 he held a professorship at the Düsseldorf Academy of Art. His work is represented in many renowned national and international collections.

Born in Greece, but living in Italy since 1956, Kounellis has been a major figure in contemporary art for over fifty years. The artist is often referred to as one of the forefathers of the Arte Povera movement – a movement that arose in the 1960s and played a central role in redefining artistic practice with radical and highly original...

Jannis Kounellis, Arte Povera pioneer, has died in Rome at the age of 80. For over half a century Kounellis transformed often lowly materials into engaging sculptural forms with his signature blend of aesthetics, poetry, and alchemy.

The Greek-Italian artist Jannis Kounellis, one of the leading figures of the Arte Povera movement, died in Rome’s Villa Mafalda hospital, aged 80, according to Italian media reports. Born in Piraeus, Greece in 1936, the artist moved to Rome at the age of 20 to study at the Academy of Fine Arts and considered the Eternal City his adopted home...

Sign up to be notified when new artworks and exhibitions by Jannis Kounellis are added to Ocula.
Sign UpLogin