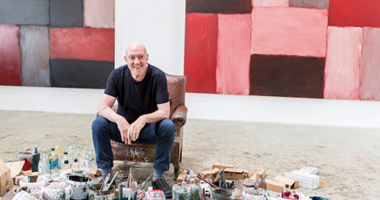 Two-time Turner Prize nominee, artist Sean Scully has long been a proponent of abstraction. He is best known for his large-scale, grid-like paintings.

Desiring to rescue abstraction from remoteness and re-inject it with exalted feeling. In a 2016 interview with Ocula Magazine, Scully explained 'in my paintings, I don't paint space. I paint things. I paint the stripe as if it's a kind of life and death.'

Born in Dublin, Sean Scully grew up south of London and studied painting at Croydon School of Art, London, and Newcastle University, where he was inspired by the colour field paintings of Mark Rothko and the minimalist abstraction of Bridget Riley. In the 1970s, he moved to America for a graduate fellowship at Harvard and later settled in New York, where he still lives part-time, in addition to Munich. His status as an immigrant and outsider has long been an important part of his philosophy about life and art.

Scully's earliest paintings, made in the UK, were inspired by the bright colours and wild stripes of Moroccan textiles. However, following his move to America in the 1970s, Scully simplified his motif and reigned in his palette.

Reflecting his upbringing in working-class neighbourhoods and his adult life in cities, Scully's works from the 1980s were inspired by conflict, discord, haphazard urban planning and human competition for survival—weighty themes reflected in the paintings' sombre palettes and cramped, brick-like compositions. While in such early works Scully used tape to delineate the clean, structured sections on his canvases, he later abandoned that hard-edge aesthetic and began painting more loosely, allowing the shapes to breathe and show evidence of their making. In Battered Earth (1988), for example, patches of cream-coloured rectangles belie their earthy underlying layers, as do the blood-coloured sections with the umber paint beneath.

Showing a further loosening up of technique, Scully's major 'Wall of Light' series works (1998–ongoing) are first drawn out with charcoal stuck to the end of a long stick before being filled in with paint. The series begun when the artist was travelling in Mexico and was struck by the play of light on Mayan stone walls. Indeed, the combination of vertical and horizontal bars in Scully's paintings are often compared to architectural elements; the sections are said to resemble Stonehenge-like structures.

While he mostly works with oil on canvas, Scully also uses watercolour, pastels and aquatints, as well as painting directly on aluminium—a support that enhances the thickness of the oil paint and its illusion of emitting light.

Sean Scully's more recent sculptures borrow the same compositions as his paintings; Air (2018) is a large cube made of multi-coloured recinto, marble and cantera, assembled in blocks that create asymmetrical grid patterns when viewed from each angle.

Sean Scully has been named as a Turner Prize nominee twice: in 1989 and again in 1993. In 2o13 he was accepted into the Royal Academy of the Arts, London. He was also declared International Artist of the Year, by Harpers Bazaar Art, in 2016.

I'm very tenacious intellectually, and very hot emotionally. I think that's like a galloping stage coach, you know, with a black horse and a white horse pulling it.

Read More Related Press The Best Things to See at the 2019 Venice Biennale 13 May 2019, AnOther

The 58 th edition of the Venice Biennale, May You Live in Interesting Times curated by Ralph Rugoff–from London’s very own Hayward Gallery–proves to be as interesting as its title promises. Venice

Sign up to be notified when new artworks and exhibitions by Sean Scully are added to Ocula.
Sign Up Login