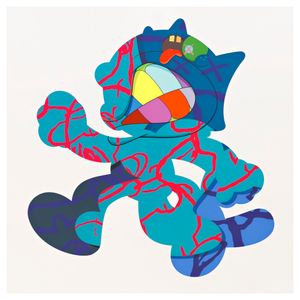 In his sculptures, paintings, and drawings characterised by exuberant colours and forms, Brian Donnelly—better known as KAWS—presents his 'Companion' figures and appropriated cartoon characters that reflect the cultural trends of our times.

In the early 1990s, KAWS began as a graffiti artist in his hometown of Jersey City before moving to New York, where he graduated with a BFA from the School of Visual Arts in 1996. After a stint as a freelance animator for The Walt Disney Company, he returned to the streets to create his own work. This entailed taking commercial posters from such brands as Calvin Klein, Guess, and Marlboro, and painting over the models' faces with what became his trademark cartoon characters—recognisable by their eyes in the form of the letter X and cauliflower-like ears—and reshowing them in public.

KAWS' 'Companion' cartoon characters quickly garnered attention for their witty and approachable design. Their standard attire—consisting of a pair of white gloves and shorts—evokes the beloved Mickey Mouse, reflecting the artist's interest in cartoon characters' cultural value. His 'Companions' have since been made into toys and other products as a result of collaborations with the streetwear brands Bathing Ape and Supreme, and the musician Kanye West, among others.

The artist also has a reputation for his playful appropriation of well-known cartoon characters. In the 2005 acrylic painting series 'Kimpsons', the cast of The Simpsons is replaced with KAWS' 'Companions'; the 2015 silkscreen prints No One's Home and Stay Steady depict Snoopy, rendered in saturated colours with their forms filled in with abstract patterns.

Because of the accessibility of KAWS' work, and his use of bold colours and imagery associated with consumer products, critics have compared it to the Pop sensibilities of creations by Andy Warhol and Jeff Koons. The artist himself has stressed the significance of approachability in his practice, as he told The Guardian in 2019: 'In my mind I thought, art's purpose is to communicate and reach people. Whichever outlet that's being done through is the right one.' 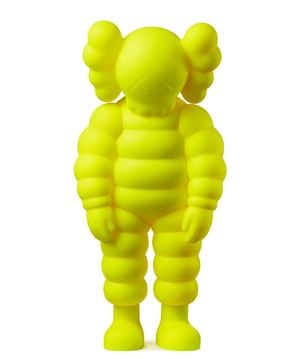 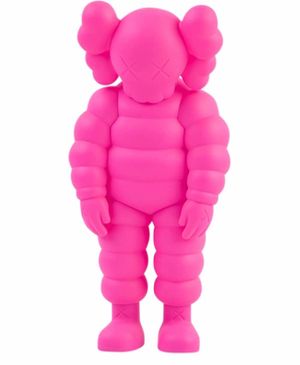 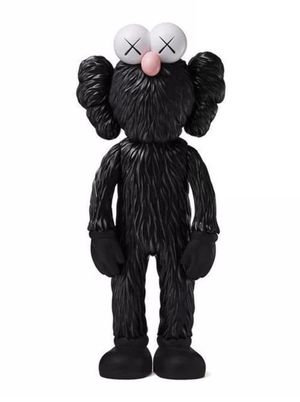 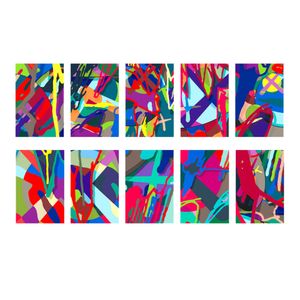 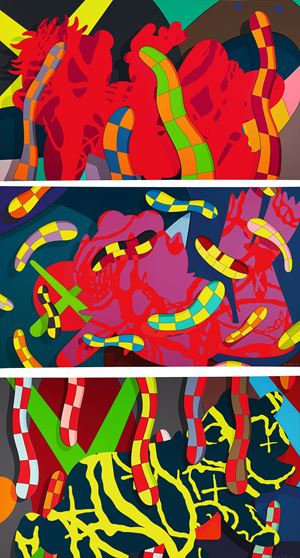 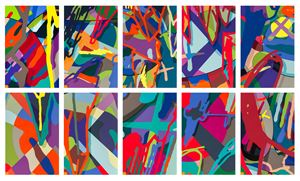 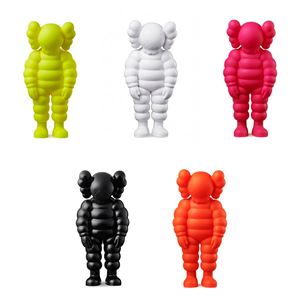 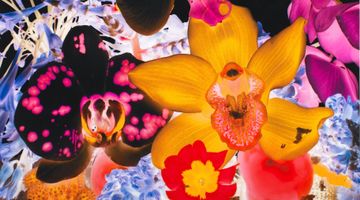 KAWS, Banksy and Josh Sperling were among artists whose work exceeded estimates at the Asia-led sale.

This week's need-to-know art news, including Christie's new global auction and an attempt at a fairer art fair by the New Art Dealers Alliance.

View All (10)
Related Press 'It has created a sense of hostility': how Kaws made the art world pay attention 19 September 2019, The Guardian

With 2.4m Instagram followers, a $14.8m sale and brawls for his T-shirts in Uniqlo, is the artist dismissed as 'conceptually bankrupt' more than just a pop culture craze?

Where the End Starts at Yuz Museum in Shanghai is the largest KAWS's exhibition in China, and also his first survey exhibition in Asia. Jointly organized by Yuz Museum and Modern Art Museum of Fort

Virtual reality is fast becoming the new norm, and is seems the iconic chocolate brand M&M’s wants a part of the action. Bringing on the keen eye and direction of fashion and luxury art imprint VISION

The NY Art Book Fair draws a huge crowd every year, and so it wasn’t a surprise that there were lines everywhere at this year’s edition—lines to get into the bathroom, lines to see certain booths, lines for the KAWS signing (the longest line of all), and lines simply to get into the fair itself. But those lines moved quickly, and...

Sign up to be notified when new artworks and exhibitions by KAWS are added to Ocula.
Sign UpLogin