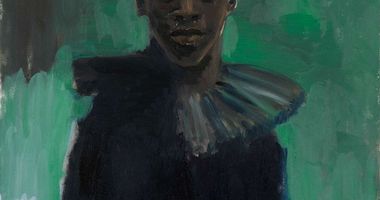 Lynette Yiadom-Boakye is an acclaimed British-Ghanaian figurative painter and writer. She is well known for her enigmatic canvases of figures set against darkened spaces that resist placement within a specific time or geography. Fabricating compositions from found imagery and, foremost, from within her imagination, Yiadom-Boakye conjures bodies at once familiar and implacable, drawing the viewer into the suggestive realm of contemporary painting.

Yiadom-Boakye's gestural canvases are often peopled with single black bodies caught in moments of pensive repose, or groups absorbed in internal dramas. Paired with lyrical and ambiguous titles such as Citrine by the Ounce (2014), In Lieu of Keen Virtue (2017) and To Improvise a Mountain (2018), Yiadom-Boakye evokes evanescent moods and moments that invite the viewer to apply their own interpretation to the artworks.

In Lynette Yiadom-Boakye's Repose I (2015), a figure emerges from chiaroscuro darkness with swift brushstrokes that leave bare canvas visible. Looking out beyond the edge of the canvas, the figure's expression is languid and impenetrable. This inscrutable nature has brought questions of representation, race, and the canon of white art history to the fore.

Lynette Yiadom-Boakye has suggested, however, that her true subject is painting itself: '[A] colour, a composition, a gesture, a particular direction of light. My starting points are usually formal ones.' She has cited Edgar Degas and Edouard Manet, as well as the unfashionable British painter Walter Sickert, as influences.

Yiadom-Boakye shares with these influences the technique of painting wet-on-wet, often completing compositions within a day. In a 2017 feature in The New Yorker, Zadie Smith noted that from Sickert and Degas Yiadom-Boakye has inherited 'a narrative compulsion' for suggestion: a literary practice of leaving sufficient space for the audience to complete the story. In this sense, the canvas becomes a text from which the artist constructs endless possibilities.

Born in 1977 in London, Yiadom-Boakye studied at Central Saint Martins College of Art and Design and Falmouth College of Art, and gained an MFA from the Royal Academy Schools. In 2013 she was shortlisted for the Turner Prize, and in 2018 she was awarded the Carnegie Prize.

Lynette Yiadom-Boakye's portraits are freed 'from the bounds of a specific time, place, or context.'

Tate has revealed that five large-scale solo exhibitions for women artists are currently in development, all of which will open during the 2020–2021 season. The announcement comes perfectly-timed for

In 2012, the artist and filmmaker John Akomfrah released a video installation, The Unfinished Conversation, an art documentary and tribute to the Jamaican-born cultural theorist Stuart Hall, who die

Sign up to be notified when new artworks and exhibitions by Lynette Yiadom-Boakye are added to Ocula.
Sign UpLogin