The Tate Britian is part of the British Tate gallery network and is the networks oldest gallery, having being founded in 1897 by Sir Henry Tate. The gallery's collection of artworks spans over 500 years, housing a significant historical collection including, a substantial collection of the works of J. M.. W Turner, in addition to a large array of Pre-Raphaelite works.

The gallery also holds a significant collection of contemporary art, despite the development of its sister gallery the Tate Modern, and displays works from Lucian Freud, David Hockney and Francis Bacon.

The Tate Britain hosts the annual Turner Prize, an often controversial prize presented to a British artist under the age of 50, with past exhibits including the works of Damien Hirst and Tracey Emin. 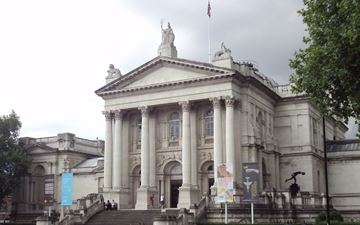 Shawanda Corbett reflects on her approach to sculpture, painting, and performance as processes of world-building.

Hollybush Gardens present the latest paintings by one of the great unsung heroines of contemporary British art, Claudette Johnson.

The artist's latest series focuses on a dilapidated hotel situated on a Jamaican beach.