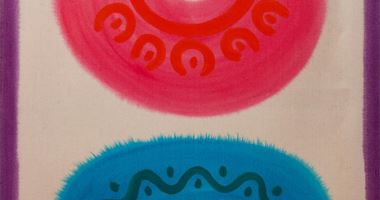 Based in London, Prafulla Mohanti is an established and celebrated Indian writer and painter. He is often associated with the Neo-Tantric Art movement that emerged alongside modernism in India in the 1960s.

Prafulla Mohanti was born and raised in the village of Nanpur in the east Indian state of Odisha. He still returns every year. The artist cites his upbringing in this place as an influence, saying, 'My painting is rooted in my village culture, which is influenced by yoga and tantra.' After graduating with a degree in architecture from the Sir J J School of Art Mumbai, the artist moved to London.

Initially moving to pursue a career in architecture and planning, Prafulla Mohanti attained a diploma in town planning in Leeds and worked for several years for the Greater London Council as an architect-planner. In 1970 he left the job to devote himself fully to art.

Prafulla Mohanti's paintings, made in the isolating and awkward culture of London, hark back to the culture that surrounded him in his upbringing. His paintings have always largely consisted of bright concentric circles filled with colour conveying light, their appearance echoing the Tantric forms of the mandalas and yantras that frame glowing deities. They also evoke the Bindu: a small dot that represents a vast and expanding Cosmos. The circle too is a symbol tied to many aspects of life.

The artist grew up with these symbols as a part of life. He was taught as a child to draw three circles to represent Brahma, Vishnu, and Mahesh. These symbols and their accompanying wealth of philosophical and spiritual meanings have remained central to Prafulla Mohanti's art. The combination of colours and precise forms, though, varies enough that no two paintings are alike.

Prafulla Mohanti's paintings have been shown all over England, Europe, India, the United States, and Japan. Prafulla Mohanti's books too have been widely published. Besides these creative pursuits, the artist has also been an active supporter of migrants, of learning and sharing culture and traditions in London's East End, and a contributor to positive development in his home village.

Sign up to be notified when new artworks and exhibitions by Prafulla Mohanti are added to Ocula.
Sign Up Login