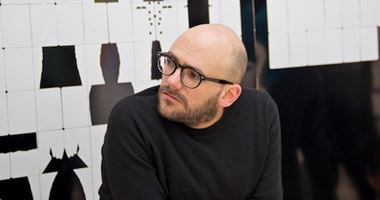 Ryan Gander's diverse practice includes sculpture, photography, print, design, film and installation, resulting in a unique portfolio of work best characterised by a love of storytelling through an ever-changing variety of materials and forms. Born in Chester in the northwest of England in 1976, Gander attended Manchester Metropolitan University where he studied interactive art: an art form that relies on the participation of its viewers. Upon graduating in 1999 with a first-class honours degree, he started work in a carpet shop in Chester until he travelled to Maastricht in the Netherlands to spend a year as a Post-Graduate Fine Art Research Participant at the Jan van Eyck Academie. He went on to take part in the artist residency programme of the Rijksakademie van beeldende kunsten in Amsterdam until 2004.

Drawing from his training as an interactive artist, Gander has frequently delivered his work as a tour of public lectures, such as the ongoing Loose Associations, which uses anecdotes to bring together otherwise disparate subjects. Gander also works with a team of technical specialists to produce more tangible works, his practice characterised by its exploration of wide spectrum of materials and techniques. In 2015, he told Ocula Magazine, 'Exhibitions that I make work off a sort of bouncing effect, moving from one medium to another, one tense to another. Mixing all devices and mechanics to make you unsure of where you are.'

Gander is a wheelchair user whose works sometimes speak to his experiences living with a long-term physical disability. A 2006 installation, Is this guilt in you too? (Cinema Verso), recreates a trip to the cinema that goes horribly wrong by trailing the confused visitor in circles as they search for a way to the screening. To create the disorienting effects, Gander filled a poorly lit gallery space at the old Whitechapel Library with illusions, obstacles and dead ends that trap the visitors. The work sheds light on some of the daily struggles for disabled people navigating our world and formed part of the Art Council's 'Adjustments' series that aimed 'to address transitional thinking on disability, equality and inclusion'. For his entry to the Venice Biennale in 2011, Gander produced The Artwork Nobody Knows, a miniature resin model of himself falling from a wheelchair as 'a self-portrait in the worst possible position'.

For me personally, I’d much rather engage with the art market and within that I can safeguard the legacy of my artwork by putting it in collections and earn my own money to produce more work.

At the time of this interview Ryan Gander is enjoying his last day at STPI before he returns to his native UK, and previous resident Rirkrit Tiravanija has returned for the opening of his solo show...

Would you try your luck with a vending machine that dispenses random artworks for a £500 fee (about $640)? British artist Ryan Gander's latest art installation is on display at London's Taro Nasu gall

It can be tiring traipsing around the annual Frieze London art fair in Regent's Park – which is why, when you pass Tokyo gallery Taro Nasu's booth, you may find yourself drawn to a black vending mach

Cockatoo Island, a short ferry ride from Sydney’s Circular Quay, is the least likely place one would expect to be simultaneously cast and filmed for a motion picture set predominantly in Berkeley, Cal

Sign up to be notified when new artworks and exhibitions by Ryan Gander are added to Ocula.
Sign UpLogin