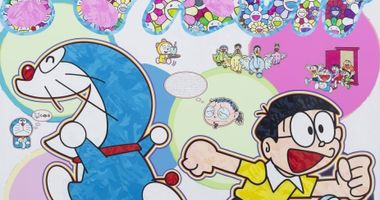 Best known for his distinctive anime-inspired characters and worlds of explosive neon colours, Takashi Murakami garnered international attention in the late 1990s with his cartoon-like paintings and sculptures.

His iconic characters and graphic style have been featured in high-profile collaborations across the fashion, art, and music industries, blurring the distinction between high and low art.

Murakami gained his BA, MFA, and PHD from the Tokyo University of the Arts, where he studied nihonga, a traditional form of Japanese painting.

Takashi Murakami's aesthetics largely derive from his concern with the emergence of kawaii (cute) visual culture in post-war Japan.

After Japan's surrender to the Allies in 1945, Japanese artists turned to creating cartoon fantasies and harmless characters such as Hello Kitty and Doraemon as a way of reinventing their culture. When these icons began to gain popularity inside and outside Japan, the Japanese government also adopted them—issuing Hello Kitty stamps, for example—to reinvent the country as cool, youthful and approachable.

Murakami uses his kawaii characters to critique Japanese society. In the painting Super Nova (1999), for example, cartoon mushrooms are infested with eyeballs on their bodies. By appropriating anime aesthetics to depict the effects of nuclear explosion on life, Murakami subverts the playfulness and fantasy expected of anime in an attempt to force the viewer to confront reality.

By the early 2000s, Murakami's style had captivated the imagination of younger artists and spurred an art movement in Japan that came to be known as 'Superflat'. Inspired by kawaii aesthetics, Superflat artists seek to conflate the dichotomies of high and low art while combining the flatness of traditional Japanese painting with references to both Eastern and Western popular culture.

Beyond visual art, Murakami's 'superflat' style has gained international icon status, having been featured across high fashion and streetwear campaigns, mass-produced items, and the music industry.

Between 2002 and 2015, Murakami famously collaborated with Louis Vuitton to redesign the brand's iconic logo print in his signature neon colour palette, and to incorporate his smiling flowers and big-eared characters into the brand's luxury bags. He has also produced collaborations with streetwear brands such as Supreme, and in 2018 worked with the late fashion designer Virgil Abloh to produce a series of artworks exhibited at Gagosian London, Paris, and Beverly Hills.

Murakami's creations have also appeared in the music industry, notably as artwork for Kanye West albums (Graduation, 2007 and Kids See Ghosts, 2018) and as a sculpture at Art Basel Miami Beach (2009) and a music video (Last Night, Good Night (Re:Dialed), 2014), both made in collaboration with Pharrell Williams. In 2019, Murakami directed and animated one of the two official music videos for Billie Eilish's song you should see me in a crown.

In addition to his anime-inspired characters, Murakami's practice is informed by contemporary events and religious iconography. His solo exhibition In the Land of the Dead, Stepping on the Tail of a Rainbow at Gagosian New York in 2014 was conceived as a reaction to the Great Tōhoku Earthquake and the Fukushima nuclear disaster of 2011.

For the works in the exhibition, Murakami borrowed from Buddhist, Daoist, and Japanese Shinto imageries—such as the enlightened Buddhist monks in the painting Isle of the Dead (2014)—and reinterpreted them as his signature psychedelic, anime-style characters, creating an environment that cultivated spirituality and encouraged healing in the aftermath of the catastrophe.

Since his introduction to the international art world in the 1990s, Takashi Murakami has ventured beyond the galleries to work as a curator and entrepreneur. In 2001, he organised a group show titled Superflat at MOCA Pacific Design Center, West Hollywood.

Other notable exhibitions curated by Murakami include Little Boy: The Arts of Japan's Exploding Subculture at Japan Society Gallery, New York (2005); Kazunori Hamana, Yuji Ueda, and Otani Workshop at Blum & Poe, New York (2016); and Juxtapoz x Superflat at Vancouver Art Gallery (2016). Murakami has also been the head of his company, Kaikai Kiki, since 2001. The company represents the forerunners of the Superflat movement, such as Chiho Aoshima, Chinatsu Ban, and Aya Takano, and supports aspiring Japanese artists.

In 2010, his sculptures and paintings were displayed in 15 rooms of the Palace of Versailles as part of his first major retrospective in France. The Museum of Contemporary Art Chicago also arranged a survey of his works in 2017, many of which had never been shown in North America. An equally recognised artist in his homeland, Murakami was awarded the 66th Art Encouragement Prize by the Japanese Ministry of Education, Culture, Sports, Science and Technology in 2016.

Fifteen thousand people gathered at the NFT.NYC conference in New York last week, with many more joining just for satellite events around the city.

Read More Ocula News Zelenskyy to Venice: ‘There Are No Tyrannies That Would Not Try to Limit Art’ Venice, 22 April 2022

The Ukrainian President spoke at the opening of an exhibition featuring works by artists including JR, Damien Hirst, Marina Abramović, and Takashi Murakami.

Now that Yuga Labs owns the rights to Larva Labs' creations, what will they do with it?

Takashi Murakami's exhibition in Berlin responds to the pop legacy of Michel Majerus.

In November 2018, Perrotin debuted its fourth gallery in Asia in the heart of Shanghai. The space was inaugurated with the exhibition Takashi Murakami in Wonderland, on view through January 5. Ju

In 1980, when the Japanese artist Takashi Murakami was 17 years old, he saw the anime movie Galaxy Express 999, about a boy finding his way as an astral traveler. 'It was like my spirit was flown aw

It seems that Vancouver has been rather superflattened by the arrival of Takashi Murakami – or at the very least supercharged. The Japanese international art world star arrived in town to open his re

Akiko Miki, International Artistic Director of the Benesse Art Site in Naoshima, Japan, presents one of the most unconventional collector's stories in Japan, that of the artist Takashi Murakami, as we

Be among the first to know when new artworks and exhibitions by Takashi Murakami are added to Ocula.
Sign Up Login