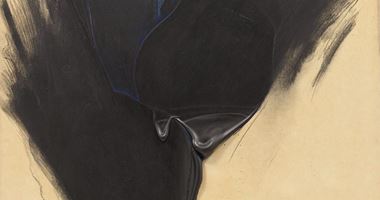 Born in Osaka in 1937, Takesada Matsutani is an internationally established Japanese post-war artist. A member of the influential Gutai group, he has become iconic for his experimental uses of vinyl glue and graphite pencil.

Takesada Matsutani's work, spanning over 50 years, is defined by organic abstractions that offer in-depth investigations into materiality and form. From the mid-1960s, he was part of the second generation of the Gutai Art Association. Takesada Matsutani's art from this Gutai period revolved around the medium of vinyl glue, which had become widely available in Japan after the war.

Matsutani found himself attracted to vinyl glue's subtle three-dimensionality and organic appearance when hardened. First pouring the liquid onto canvas to harden as it dripped, he soon began experimenting with fans, hairdryers, and his breath to create curvaceous, bodily shapes, as exemplified in the visceral, fleshy relief forms of the series 'Work-63' (1963).

Immigrating to Paris in 1966, Matsutani joined William Hayter's printmaking studio, Atelier 17. After Gutai disbanded in 1972, inspired by his experiences in printing and engraving at Atelier 17, the artist quickly steered his art in a new direction. As a result, Takesada Matsutani's paintings and prints from the late 1960s and early 1970s saw a brief introduction of vibrant colours in hard-edged abstractions that combined curved and rectangular planes.

Later in the 1970s, inspired by Japanese philosophy and calligraphy, Matsutani began producing black-and-white graphite drawings on paper. In these works, graphite surfaces are made dense by repeated pencil strokes. The artist has continued this style for over 40 years with variations in scale and technique. In 10-metre-long Stream (1984), for example, he blanketed paper with graphite, leaving a horizontal white line down the middle, then applied turpentine to dissolve the graphite.

Vinyl adhesive has made regular reappearances in Matsutani's work in combination with graphite and paint. Works like Triangle-18 (2018) reflect an amalgamation of the artist's inventive methodologies; on a canvas blackened with graphite, he applied vinyl glue to a blown-up form he cut in half while drying, creating a shape akin to a smile, an opening flower, ripples, or wrinkles.

Takesada Matsutani's artworks have featured in exhibitions in Japan, Europe, the United States, and South America, and can be found in major public collections across the globe, including The National Museum of Modern Art, Tokyo; the Institut national d'histoire de l'art, Paris; and the Victoria and Albert Museum, London.

Takesada Matsutani lives and works between France and Japan.

It is easy to drive past the clutch of buildings that are Hauser & Wirth's rural outpost in Somerset. They are inconspicuous alongside similar farmsteads concealed in an agrarian landscape of steep in

Takesada Matsutani has been firmly implanted in France after decades of expatriation, and yet retains a distinctly Japanese sensibility to his experimental, gestural practice and exploration of unusua

'It's important to allow your early work to continue to influence you,' says Takesada Matsutani (b. 1937), pointing to the paintings, drawings, and writings on the floors, pillars, and walls of his cr

In his Paris studio, Japanese-born artist Takesada Matsutani talks about how he came to join the Gutai Art Association in 1963, moved to Paris in 1966, and how vinyl adhesive glue and graphite have su

5 new artworks by Takesada Matsutani have recently been added to Ocula. Sign up to be among the first to know when new works become available.
Sign Up Login