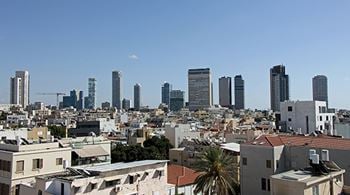 This Tel Aviv Art Guide goes beyond the historic city's world-famous street art scene, to spotlight the museums, galleries, and non-profit centres that are making Tel Aviv second to Berlin for art and culture.

Tel Aviv's 'White City'—located in the central area of Lev Ha'ir—is named so for the presence of over 4,000 white Bauhaus buildings that have given it UNESCO World Heritage status. At the centre of this is the Bauhaus Center, a must-see among Tel Aviv art museums, providing a platform for understanding the history of the White City. Guided tours take place every Friday at 10am. The area is also home to a collection of Tel Aviv art galleries promoting works by Israeli artists, including Somner Gallery, founded in 1999 and located on Rothschild Boulevard, whose 'S2' project space holds small-scale exhibitions curated by the exhibiting artists themselves. Nearby galleries include Hezi Cohen Gallery, Urban Gallery, and Noga Gallery, which, like Somner Gallery, has a dedicated space for exhibitions by emerging artists.

Prominent Tel Aviv galleries dotted about the city include Chelouche Gallery, located in a twin house with immense windows shedding light upon works by local and international artists, along with Dvir Gallery in a sleek, bunker-like building; Hezi Cohen, Alon Segev Gallery, and Braverman Gallery.

The Tel Aviv Museum of Art, located in central Tel Aviv and designed by Preston Scott Cohen, is home to works by Chagall, Pollock, Picasso, and more, along with many Israeli artists, and. Tel Aviv exhibitions of scale are plentiful here, with past presentations including Raymond Pettibon, Rachel Maclean, Yonatan Vinitsky, and Hans Op de Beeck. The museum is complemented by a sculpture garden and architecture and design galleries. Also located in central Tel Aviv is the Center for Contemporary Art (CCA)—a commission-based institution spanning three floors that was initially established to showcase time-based art, providing space for experimental Israeli and international artists. Similar to CCA is the non-profit Artspace Tel Aviv, located in the Kiryat HaMelacha and presenting works by artists from the neighbourhood, which is filled with many artist studios.

Located on Bialik Street is the four-storey Rubin Gallery, which was once the home of painter Reuben Rubin, whose works capture early life in Tel Aviv—an era that is also captures at the castle-like Bialik House, where poet Chaim Nachman once lived.

On Tel Aviv's periphery is Gordon Gallery, which was founded in 1966 and is an active platform for artistic discourse, publishing numerous catalogues and hosting regular talks. The gallery has launched the careers of many Israeli artists, with names in its roster including Avner Katz, Gal Weinstein, Ohad Meromi, and Ron Arad. Not far from here, visitors can make their way to the Ilana Goor museum, situated in an 18th-century building that looks across the sea, and exhibits objects such as furniture and jewellery, along with works by sculptor Ilana Goor.