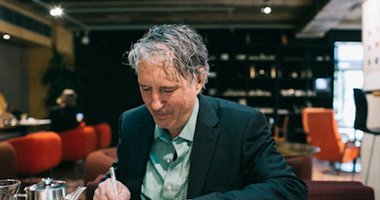 Bringing together elements of cartoons, film noir, punk aesthetics, and art history, as well as political and social critique, Raymond Pettibon captures contemporary America in his illustrations and collages.

Born Raymond Ginn in Tucson, Arizona, in 1957, the artist studied economics at the University of California, Los Angeles. He began his artistic career in 1976, shortly before he graduated, by designing concert flyers and album covers for Black Flag—the California-based punk band headed by his brother and guitarist Greg Ginn. It was also around this time that Pettibon adopted his surname, which was originally his father's nickname for him.

Raymond Pettibon began to gain a following in the punk rock scene for his Black Flag illustrations, which drew from the dark and violent imagery associated with film noir and punk culture. This soon led to his reputation as a contemporary artist working with text, drawing, and American pop culture; by the late 1980s and early 90s, Pettibon was holding solo exhibitions at galleries in New York, Los Angeles, and Europe.

While his stylised black-and-white, satirical, and graffitied aesthetic is often compared to that of political cartoons, Raymond Pettibon rarely employs exaggeration that is characteristic of the genre. As he told Modern Matterin 2020: '[Honoré] Daumier was a formative influence on me . . . though for the most part, I shy away from caricature'. The overtly political nature of his oeuvre, as well as his use of text and image, draw inspiration from a range of influences including the work of painter Francisco Goya and caricaturist Thomas Rowlandson, and contemporary socio-political issues.

In addition to his two-dimensional works, Pettibon produced several low-fi videos in the 1980s that examine American counterculture of the 1960s and 70s through disjointed scenes and narratives. In 2019, excerpts from his scripts for earlier films such as Weatherman '69 (1989) and Sir Drone: A New Film About the New Beatles (1989-1990), were performed as staged readings as part of Whoever Shows: Strike Uyp th' Band!, New Museum, New York, for Performa 19 Biennial.

Raymond Pettibon is also known for his artistic and commercial collaborations. These include designing the cover for the pioneering rock band Sonic Youth's 1990 album Goo; producing a zine with Canadian artist Marcel Dzama, which led to the exhibition Forgetting the Hand at David Zwirner, New York, in 2016; and a collaboration with Dior in 2019.

And What is Drawing For?, Tel Aviv Museum of Art (2019); ... No Hugs Coming, CFA Contemporary Fine Arts, Berlin (2018); and The Cloud of Misreading, Garage Museum of Contemporary Art, Moscow (2017). In 2017, the New Museum organised a major retrospective exhibition of Pettibon's oeuvre, A Pen of All Work, which travelled to Bonnefantenmuseum in the Netherlands later that year.

Never Again. Art against War and Fascism in the 20th and 21st centuries, Museum on the Vistula, Warsaw (2019); Too Fast to Live, Too Young to Die: Punk Graphics, 1976-1986, MAD Museum of Arts and Design, New York (2019); Everything Is Connected: Art and Conspiracy, Metropolitan Museum of Art, New York (2018); PUNK. Its Traces in Contemporary Art, Museu d'Art Contemporani de Barcelona (MACBA), Barcelona (2016).

The reason comic books are related to my art was that, for me, it was the way to learn how to draw, because it's like a visual shorthand. And also there is a narrative aspect.

Read More
Related Press Raymond Pettibon | Hang One of These on the Establishment and Let's See What They Say 15 October 2019, FLAUNT

Everyone knows Raymond Pettibon. Even if you don't recognise the name, his inky cross-hatched lines and confident handwriting have probably swirled around your eyes at some point—interconnecting webs of history, baseball stats, freight trains, surfers, musical announcements, and scathing critique in words and images—getting stuck...

In 1974, Black Panthers artist Emory Douglas created a portrait of Gerald Ford, America's 38th president, being pulled by puppet strings held by giant corporations. A speech bubble had Ford saying: 'I Gerald Ford am the 38th puppet of the United States.'

Read More
Related Press WHAT TO SEE DURING FRIEZE WEEK 2017 3 May 2017, Whitewall

Sign up to be notified when new artworks and exhibitions by Raymond Pettibon are added to Ocula.
Sign UpLogin