Originally educated in banking administration, cultural management, and curatorial practice in Switzerland, France, and the United States, Koyo Kouoh is a Cameroonian-born curator and cultural producer who lives and works in Dakar, Senegal.

Kouoh is the founding director of Raw Material Company, which started as a mobile site for art practice and critical exchange in 2008, before Kouoh established a permanent space in April 2011 in midtown Dakar.

Kouoh was the coordinator of cultural programmes at the Gorée Institute in Senegal from 1998 to 2002, and between 2000 and 2004 she also collaborated with the Dakar Biennale. She also co-curated Les Rencontres Africaines de la Photographie in Bamako in 2001 and 2003.

In this interview, Kuouh talks about how she entered into the arts, what her intentions are as a curator who has curated exhibitions all over the world, serving as advisor to the artistic director for Documenta 12 and member of the Golden Lion Jury at the 50th Venice Biennale in 2003.

As an advisor, I am very respectful of this hierarchy and stick to my role of directing attention to certain contexts, artists and practices that may otherwise go unnoticed.

SBCould you talk about how you got into the arts and how your development within the field led you towards the role of curator and cultural producer?

Have there been any specific projects that worked as key moments in your career, or difficulties you faced that strengthened your resolve to forge a career in the arts?

KKAs a youth I was an avid reader of novels. Literature was and still is the art form I admire the most. I studied banking administration in Switzerland, and was actually predestined for a career as a trader at Credit Suisse back in the late 1980s. I always enjoyed art and regularly visited shows wherever I was. But it is the friendship with a Swiss artist duo that really awoke my aspiration to work in the arts. 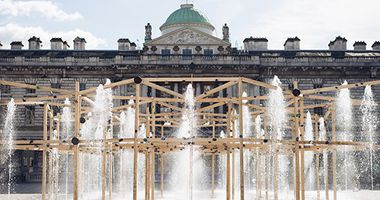 Meeting Swiss playwright and actor Dominique Rust and German costume designer Clarissa Herbst opened a totally different world for me. Their eclectic work in performance, installation and costume and graphic design is unfortunately totally under the international radar.

However, it was clear that I had absolutely no interest in becoming an artist myself. I was concerned with the lack of visibility of artistic and intellectual ideas coming from Africa and its diaspora in a country such as Switzerland, where I was living then.

It is out of this perceived necessity—to make Africa related practices more visible—that I started organising discursive programmes and writing for local magazines. Later, a visit to Dakar in the mid 1990's shifted my focus to this city.

SBYou started Raw Material Company in Dakar in 2008 as a mobile site for art practice and critical exchange before establishing a permanent space In April 2011 in midtown Dakar.

The centre works to promote the 'appreciation and growth of artistic and intellectual creativity in Africa,' with a program that views visual art as a 'potent tool capable of shifting perspectives to ignite engagement for art practice as a viable path for social and political transformation.'

Could you talk about how the space started?

KKI work pretty much out of necessity. Meaning that I do things that need to be done and that haven't been done. Despite Dakar's international image as a vibrant cultural city, there was no single formal space to debate the role of art in society in a recognisable programmatic manner.

Things were taking place erratically and informally, hence not providing any grasp of the important ideas being dealt with. Raw Material Company came in to fill that void.

SBFurther to this, how has the program developed, given it is trans-disciplinary and is equally informed by urbanity, literature, film, politics, cuisine, and diasporas? And furthermore, how has it settled into its context, given the permanent space was produced in reflection of a need for such a space in Dakar?

KKSince its physical establishment, Raw Material Company has applied a range of diverse formats of mediating art through social and political thought.

All these exhibitions were accompanied by residencies for the participating artists and curators as well as critical publications.

In 2014, we are running a program on personal liberties, with an emphasis on sexuality and freedom of expression. It is a series of activities that include exhibitions, seminars and a final publication.

Our program is generally well received if one measures it by the number of artists and related professionals who want to collaborate with us. Even though we are sometimes critiqued as being politically and curatorially too challenging. But we take it as a compliment and encouragement to continue on this path because it means that our work is moving something.

While I am interested in artistic practice and discourse regardless of any national origin, I feel a deep responsibility to deal with what is related to Africa.

I wonder if you could talk about your participations in Documenta, how you have worked with each edition, and how you view the exhibition's significance as a global event?

KKEvery Documenta is a new curatorial enterprise with the artistic director as the leader. As such, every director has his/her own ideas and curatorial practice.

As an advisor, I am very respectful of this hierarchy and stick to my role of directing attention to certain contexts, artists and practices that may otherwise go unnoticed. The work on Documenta 12 was most fulfilling. Roger M. Buergel has an admirable capacity to develop interest and expand realms of collaboration that produce a large horizon. 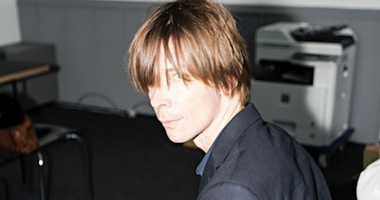 For Documenta 14, my role was in the finding committee and as such you have a great responsibility in choosing the right person in the light of expectations that the art world has from this event. I think our choice of Adam Szymczyk as artistic director has been generally well received.

Documenta gained its significance as a serious and intellectual art event mainly from the dramatic context from which it was conceived—postwar Germany/Europe. For the greater part of its existence, it functioned pretty much as a Eurocentric art event with a noticeable shift with Harald Szeeman's Documenta 5.

Yet, it was with Catherine David's Documenta X in 1997 that the event opened up to a world of practices and ideas beyond Europe and the Americas. Okwui Enwezor completed the process by making it truly global in a resolute manner with his Documenta 11 in 2002.

SBI wanted to talk about your participation at the inaugural 1:54 African Art Fair in London, in which you curated the education and artistic programme. How did you approach the idea of working with an art fair, and one that is focused on one particular region? 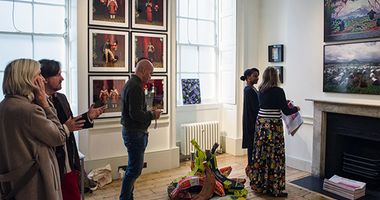 KKMy work is generally not geared to the market. Nevertheless, it was important for me to support this particular initiative with a programme that added critical weight and gave credibility to the event. Art fairs have become unavoidable platforms of discussion, and 1:54 is no exception to that.

I have grown beyond the idea of Africa as a geographical region, and rather, treat it as a mindset to give it a mental space that can inhabited by anyone interested in the idea of Africa. While I am interested in artistic practice and discourse regardless of any national origin, I feel a deep responsibility to deal with what is related to Africa.

Every Documenta is a new curatorial enterprise with the artistic director as the leader. As such, every director has his/her own ideas and curatorial practice.

SBWhat were the highlights, in your view, of the programme you devised for 1:54? 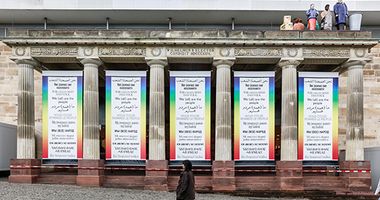 KKFrom my point of view the entire program was a highlight. However, I believe that one on one artist talks are always very inspiring and provide greater insight into a specific practice.

SBIn thinking about the idea of the global, you have noted in an interview for Make Yourself at Home, an exhibition presented at the Kunsthal Charlottenborg— which proposed 'Contemporary hospitality in a changed world'—that migration has always been an issue, though it is the media that changes our responses and views towards such a phenomenon.

I wanted to think about this in relation to the idea of art and its events or exhibitions producing spaces for re-mediation, given how biennales and oftentimes art fairs have become spaces within which to contemplate and challenge the issues that arise from the circulations and flows of globalisation.

Do you think art has the potential to act as a social agent and mediator today on a global level? If so, how? 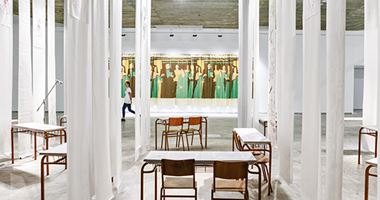 KKA lot of art produced in the last twenty years often take the form of social advocacy. The last Berlin Biennial is the most recent kaleidoscope of it.

While I am interested in the political discourse embedded in such productions, I surely doubt that art has the power to change the course of world politics or even the world economy. I would even argue that it is not art's role to have a moral value.

Even though Duchamp has freed the artist from the shackles of form and discipline—meaning anything can be art as long as the artist declares it as such—I believe that the issues that are dealt with in these types of works are far more challenging than any art that could be made about or for them.

This, however, does not diminish the quality of the art for the matter. For my part, art has already done a lot if it can elevate consciousness and therefore build some social value. —[O]