ART021 takes its name from the Shanghai dialing code. The numbers serve as a synonym for the city, but only for people calling from within China—from outside the country, you'd call +8621. Still, 021 make more sense for this fair. Founded in 2013 by local PR director Bao Yifeng and former gallery director Kelly Ying, ART021's chief ambition is to connect a new crop of Chinese collectors to galleries with spaces in China. The whole conversation is very much a domestic call.

The event took place from November 12—16 in a uniquely Shanghai setting: art deco buildings just behind the Bund, near the Rockbund Art Museum and the Peninsula Hotel, that are on the brink of being restored to their former glory. In its second edition, the fair's participants rose to 54 galleries, which were spread across the five floors of the National Industrial Bank Building to shopfronts on nearby Yuanmingyuan Road and several floors of the China Baptist Publication Building (CBPB).

The CBPB was a surprise coup for the fair, having lain empty for years. The floors yielded a little under foot, and gallery staff complained of the cold, but it looked excellent. Floors 4-8 were X-ed out in the elevators — presumably because they're still derelict. (While these old buildings were spruced up for a determinedly high-end, commercial fair, what was until recently a flashy Ermenegildo Zegna store nearby was artfully defurbished by gallery director Magda Danysz and a crew of street artists. They introduced piles of rubble, trash, and torn off fliers, as well as beautiful paint and pasted paper murals, to the space.)

On the ninth floor of the CBPB was Your Chance Encounter, a site specific installation by Olafur Eliasson, whose installation Riverbed (2014) still flows though Louisiana Museum of Art. For this installation and within a white-walled room with dusty concrete floors, the artist placed three partial cylinders rotating around an HMI lamp, creating lighthouse-like beams that widened and narrowed according to the work's own counter-intuitive time signature. Other high profile international artists featured at the fair, including cerebral sculptures by Tony Cragg, neon works by Tracy Emin, and prints by Francis Bacon and Gerhard Richter. The most interesting original works were by Chinese artists, however, with Shanghainese conceptual artist Xu Zhen reigning supreme, an utterly ubiquitous presence at the fair and beyond.

Xu's Under Heaven paintings, created using cake decorating nozzles, were not only shown at Long March Space and printed on the fair's branded tote bags, but also restored to their edible inspiration in cupcake form and sold as prints at the opening of Pimo, a retail art pop up. Xu's sculpture Eternity (2014), which mounts inverted Buddhist statues on the necks of Classical sculptures, was both installed full size opposite the store and sold in miniature inside. Co-founded by Xu and David Chau, by the end of the weekend Pimo had sold 30 sculptures and 100 prints by Xu Zhen, plus T-shirts and accessories totaling almost 2 million RMB in revenue. Xu also exhibited a miniature version of his Movement Field (2013) in a crate sponsored by Absolut vodka, several works with ShanghART Gallery, and was behind the Madein Gallery booth, which showed sculptures made of industrial materials by He An. With an opening at ShanghART Gallery the same week, director Lorenz Helbling declared an unofficial "Xu Zhen Art Week".

Xu now has the whole life cycle of an art work locked down, from conceptualization and production through exhibition, sale and a mass market exit, inevitably, through the gift shop. Christie's, which held its first independent auction in mainland China last year and opened its own space on Yuanmingyuan Road earlier this year, might want to prepare for the advent of a Madein auction house.

Eliasson's Your Chance Encounter and Xu's Eternity were the two most prominent works shown outside of gallery booths at ART021, but several large works were also selected for display on the ground floors of both main buildings. Among the best of these in the National Industrial Bank Building was Yin Xiuzhen's Unbearable Warmth (2008), 1,000 scarves coiled to create a thick, target-shaped rug, and Hu Jieming's The Remnant of Images (2013), multiscreen video installations housed in filing cabinets, that give the sense of Chinese history's looping implications, refusing to be neatly filed away.

In the CBPB building, the selected works ranged widely in emotional tone and anatomical accuracy. Subodh Gupta's_Love_ (2014), a heart shaped stainless steel and brass structure that resembles tinsel but weighs 250kg was installed by Arario Gallery, while Li Qing's gruesome The Last Doctrine — After Repin's 'Tolstoy Plowing' (2013) was shown by Hive Center for Contemporary Art. Li's sculpture depicts a bifurcated horse and plowman, their spines and internal organs made visible, placing Repin's work in anachronistic homage to Damien Hirst's Mother and Child (Divided) (1993). Incidentally, Xu Zhen's fingerprints appear here too, having already one-upped Hirst's work back in 2007 using formaldehyde-filled tanks, concrete and meat to create two halves of a massive dinosaur, which are now installed in ShanghART's Taopu storage space.

Another of the standout works was Zhang Yunyao's graphite on felt Medusa head entitled_Granule_ (2014), shown by Don Gallery. The piece evidences some of the incredible skill that saw Zhang selected as the Glenfiddich artist in residence in 2013. (Zhang's 2012 predecessor, the masterful hyperrealist painter of interiors Yuan Yuan, also showed at ART021 in the booth of Edouard Malingue Gallery.) A splash of the blue Zhang has been working with recently appears in the work, which coincidentally matches the color of the fair's branded materials, as well as Yang Shaobin's_I Am My Tools - Wall Street No. 6_ (2013) and a Porsche Carrera parked on the ground floor of the National Industrial Bank Building.

While selected works were given prominent positions, there was no pretension of curating sections of themed content at the fair. With a large space devoted to showing favorite works purchased by young Chinese collectors, ART021 was much more focused on encouraging and facilitating sales. Many of the galleries Ocula spoke to were happy with the results, while acknowledging that the works were priced more reasonably than at bigger, more international fairs.

Most of the higher profile galleries showed in the National Industrial Bank building, including Lehmann Maupin, Pace, James Cohan, Marian Goodman, and Ota Fine Arts. Korean gallery Arario showed Fu Xiaotong's phenomenal mountain composed, as the title says, of 718,000 Pinpricks (2014), one of a long lineage of Chinese artworks whose value is displayed in its evident hard work. Beijing Commune showed ink on silk works by Hu Xiaoyuan, who traces the lines of wood grain before shaving away the wood and painting it white. By placing the silk over the painted wood, she restores it to an ersatz representation of its original condition, rendering her meticulous work beautifully futile.

As is often the case in China, one of the galleries' main complaints was people touching the works. Perrotin had to move the stoneware sculpture_Siren_ (2014) by Klara Kristalova after a visitor leaned on it with both hands, while White Cube switched off Darren Almond's Perfect Time 12x6 (2012) after visitors manually flicked the numbers on the 72 synchronized digital clocks. With both galleries reporting brisk sales, perhaps it was just that visitors couldn't wait to get their hands on the works.**—[O] 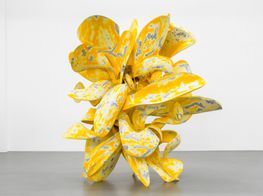 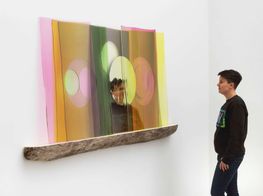 Olafur Eliasson is a Danish-Icelandic artist known for his sculptures and large-scale, immersive installations. Eliasson completed his studies at the Royal Danish Academy of Art in 1995 and relocated to Berlin upon graduating where he established 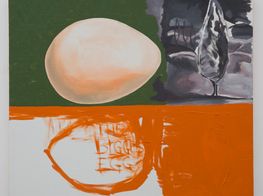 Huang Ran lives and works in London and Beijing. He graduated from Birmingham Institue of Art and Design with a First Class Bachelor of Arts (Hons) degree in 2004. He gained his Masters in Fine Arts at Goldsmiths College, University of London in 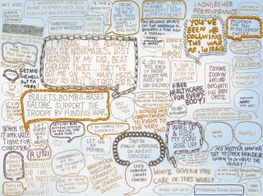 XU ZHEN® (徐震) is a Chinese conceptual artist and curator. Working across a variety of media, including installation, video, painting, and performance, he has established himself as an iconic figure in contemporary Chinese art. Xu’s works 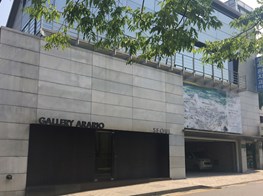 In March 2014, ARARIO GALLERY Seoul has moved to So- gyuk Dong, a place known as the Mecha of Korea’s contemporary art scene. ARARIO GALLERY’s So- gyuk Dong era began with the solo exhibition of its exclusive-contract artist, In-bae 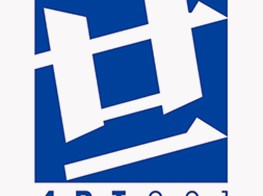 2014 Art021 has selected galleries from America, Europe, Asia and all across China to participate in the fair, side-by-side with the “1 + 1 project” and “Editions” section. Two featured exhibitions and related symposium and