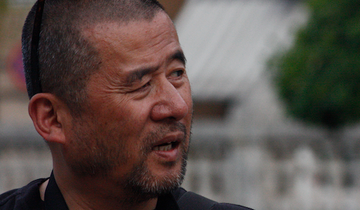 Credited by some as the father of video art in China, Zhang Peili also works with digital media, as well as painting, sculpture, and installation, often exploring image construction in the media and our perceptions of reality.

Born in 1957 in Hangzhou, Zhang received an MFA in oil painting from the city's Zhejiang Academy of Fine Arts—now China Academy of Art—in 1984. His early work 'X?' (1986–1987) is a series of photorealistic oil paintings depicting subject matter, such as latex gloves, which references the artist's childhood memories of poor health and his parent's employment at a children's hospital. In 1986, Zhang co-founded, with fellow artists Geng Jianyi and Song Lin, the Pond Society, which orchestrated public happenings and interventions in Hangzhou with a mission to broaden the definition of art.

Zhang is also closely associated with the '85 New Wave Movement, an avantgarde school that flourished in China between 1985 and 1989. At the 1988 Huangshan Conference—the historic symposium that led to the China/Avant-Garde exhibition at the National Art Gallery (now the National Art Museum of China) in Beijing in 1989—Zhang presented 30x30, a performance that is often referred to as the first instance of Chinese video art. In the three-hour video, the artist repeatedly breaks a mirror and glues its pieces back together. The pace is so slow that when it was first shown, members of the audience demanded the video be fast-forwarded after 20 minutes. With this work, Zhang raises the question of what constitutes art—a concern he continues to explore.

Repetition of simple, banal actions is a recurring theme in Zhang's videos. Document on Hygiene No. 3 (1991), for example, shows the artist washing a chicken with a bar of soap—an absurd and humorous response to the national campaigns of the time for better hygiene. The chicken, whose male counterpart's form has been likened to the outlines of China's map, is rebellious at first but grows docile in Zhang's hands, a taming that potentially alludes to China's oppression of dissidents. In the six-channel video installation Uncertain Pleasure II (1996), close-ups follow a hand as it scratches a naked body, exploring the themes of surveillance and voyeurism while subtly commenting on social control in China in the 1990s.

While known as a pioneer of video art, Zhang also works with other media, often combining video with it. The five-channel work A Gust of Wind (2008), which shows a room being destroyed by a strong wind from different angles, is often displayed beside the remains of the room itself. Other key works, however, are without video content. Solemn Circle (2014) takes the form of a kinetic sculpture, consisting of a large white flag that moves up and down along the length of a four-metre pillar: an ambiguous surrender, perhaps.

Selected solo exhibitions include Record. Repeat. at the Art Institute of Chicago (2017)—the first major retrospective presentation of the artist's work in an American museum—and Certain Pleasures at the Minsheng Art Museum, Shanghai, in 2011. In 2003, Zhang helped found the New-Media Art department at the China Academy of Art in Hangzhou, and he is currently director of OCAT Shanghai, a non-profit museum for new media and video art. In an interview with Ocula Magazine in 2015, Zhang said that his goal at OCAT has been to 'appeal to audiences ... to help them discover that video art actually belongs to the common people and reflects their daily lives.'

Not for sale Asia Art Archive