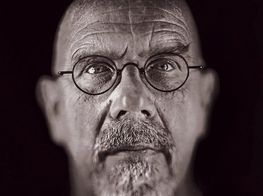 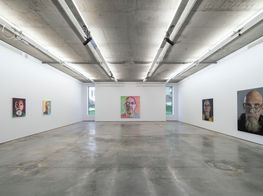 Chuck Close died on 19 August in a hospital in Oceanside, New York. He was 81.

Close was born in Monroe, Washington in 1940. His father, a handyman and amateur inventor, died when Close was just 11, leaving him with his mother, a piano teacher.

Close's life and art were strongly informed by difficulties. He believed the large-format portraits that made him famous were inspired by an effortful attention to faces he developed in response to his prosopagnosia, or face blindness.

In 1988, a collapsed spinal artery left him paralysed from the neck down. After months of rehab, he was able to paint with brushes tied to his hand.

He then began working on gridded canvases, creating colourful abstract shapes in each square that together formed a near photo-realist portrait.

While others compared the compositions to pixels and pointillism, Close cited his grandmother's crochet as an inspiration.

Late in life, Close had around 10,000 of his hand-painted marks digitised, which he then dragged and dropped to produce portraits of Cecily Brown, Kiki Smith, Cindy Sherman, and Kara Walker.

Close painted himself, artist friends and family almost exclusively, though he did make an exception for a portrait of Bill Clinton he completed in 2006. This was after Clinton awarded him a National Medal of Arts in 2000.

In addition to painting, Close spent decades shooting nude photographs, which Pace presented in a survey show in 2014.

Close admitted speaking bluntly about their bodies, but denied harassing them.

The artist was diagnosed with frontotemporal dementia in 2015. His neurologist told The New York Times his inappropriate behaviour was 'part of his underlying medical condition'.

An exhibition by Close, entitled Infinite, is on now at Gary Tatintsian Gallery, Moscow.

'Kaari was a force of nature and a beautiful human being,' said White Cube founder Jay Jopling in a statement.

'Her work powerfully skewered the fallacies of the American dream,' he said.

Upson was born in 1970 in San Bernardino, California. She completed an MFA at the California Institute of Arts in 2007.

While studying, she discovered an archive of personal belongings in an abandoned house, which inspired her most renowned work, The Larry Project (2005–2012).

Upson's fictional Larry became a character in her dramatisation of American life.