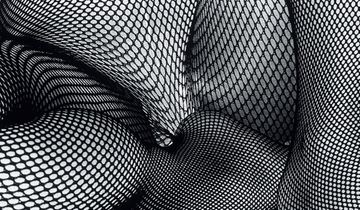 At the heart of Japanese photographer Daido Moriyama's black and white, gritty, and starkly contrasted photographs lies a fascination with the modern city—a constantly shifting space, populated with the pushes and pulls of tradition and new values, whirling with desire.

While acclaimed for his snapshots of the underside of rapidly changing Japanese society in the 1960s and 70s, Moriyama is also known for his immortalisation of ordinary yet beautiful moments.

Moriyama was born and raised in Osaka, where he originally trained as a graphic designer. Captivated by the energy of a photography studio he visited, he decided to take on photography and joined Osaka-based photographer Takeji Iwamiya's studio in 1959. Two years later, Moriyama moved to Tokyo for VIVO, a prominent photographers' collective. When the group disbanded soon after his arrival, Eikoh Hosoe—a founding member of VIVO—took Moriyama in as his assistant.

In 1964, Moriyama began working as a freelance photographer. He was hugely inspired by Jack Kerouac's On the Road and William Klein's confrontational, documentary-style photo books charting life in New York, but also by the writings of Yukio Mishima, street and crime scene photography of Weegee, and silk screened images of Andy Warhol. Moriyama took to the streets with a small compact camera, with which he has always worked since, and took snapshots of mundane, passing moments that interested him. 'Japan: A Photo Theatre', his first major series published in 1968, brings attention to a Tokyo that was then undergoing an immense transformation, breaking off with traditions to become a modern, urban city, through photographs of a traveling theatre group.

The year 1968 also coincided with the establishment of Provoke, a radical photography magazine founded by Japanese photographers and poets—among them Takahiko Okada, Takuma Nakahira, and Koji Taki—and which Moriyama joined in the second issue. While Provoke lasted only three installments, its saturated, anti-academic, and experimental aesthetic became influential on younger generations of Japanese photographers. Known as the are-bure-boke style, roughly translated as 'grainy, blurry, out of focus', the Provoke style is foremost associated with Moriyama's oeuvre. His revolutionary spirit is captured in 'Farewell Photography' (1972), in which the artist includes technological mistakes as finished products, pushing at the definition of a successful photographic image.

Gaining reputation, Moriyama was a central figure in the group exhibition New Japanese Photography at the Museum of Modern Art, New York, in 1974, which traveled to several locations including Minneapolis Institute of Art and the San Francisco Museum of Modern Art. Moriyama himself began to travel outside Japan, visiting New York for the first time with graphic designer Tadanori Yokoo in 1971. In the Ocula Report Daido Moriyama: The Erotics of Photography (2019), Tianyuan Deng describes the photographs taken during this trip—published under the title Another Country in New York in 1974—as '[insisting] on the "photographed-ness" of photography'. Strategies such as using two vertical cells of sequential films in each image, for example, stress the quality of seriality that is intrinsic to photography.

While most known for his monochrome photography, Moriyama has been working with colour since the 1970s. In 2016, Fondation Cartier pour l'art Contemporain in Paris organised Daido Tokyo, his first major solo exhibition to focus on colour photographs, that showed 'Tokyo Color' (2008–2015)—a series containing 86 chromogenic prints of scenes from Shinjuku, Tokyo. Daido Tokyo also included the black-and-white series 'Dog and Mesh Tights' (2014–5), similarly taken in Tokyo, with the title borrowed from Moriyama's earlier iconic works. One of them, Stray Dog (1971) captures a stray dog he saw outside a hotel in Aomori, gazing ambiguously into the camera, while the 'Tights' series (1986) consists of erotic photographs of fishnet stockings that evoke abstract configurations.

A highly prolific artist, Moriyama has published over 150 photo books and held more than 100 solo exhibitions since 1968.

In 2004, Moriyama was awarded the Lifetime Achievement Award from the Photographic Society of Japan; in 2019, he won the Hasselblad Foundation International Award in Photography.

Read More Ocula Feature Daido Moriyama: The Erotics of Photography By Tianyuan Deng, Tokyo Daido Moriyama is one of the most influential avantgarde photographers to emerge out of postwar Japan.

Related Video & Audio Daido Moriyama: The Mighty Power 20 December 2014, Nowness / 11 December 2012 Acclaimed Japanese photographer Daido Moriyama's sensual approach to the urban landscape is revealed in this edifying short by the Hong Kong-based filmmaker Ringo Tang. Now in his 70s, Moriyama shot to fame when his grainy black-and-white images depicting a post-war Japan in flux won the country's New Artist Award in 1967 and has since had major...