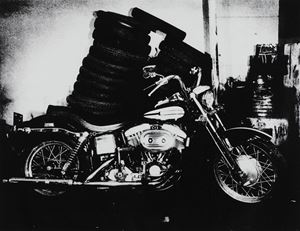 Taka Ishii Gallery Photography / Film is pleased to present Silkscreen, an exhibition of works by Daido Moriyama from January 11 to February 22. Since the mid 1960s, Moriyama has consistently interrogated photography and through his photographic practice, which he characterizes as the 'passerby's view,' he transformed the history of the medium in Japan. Silkscreen, his 18th solo exhibition with and his first in three years at the gallery, will feature six silkscreen (a printmaking method in which ink or paint is pushed through a fine mesh screen) works, including large format works produced in 2013.

Questioning conventional photography and its definition by subjects and the narratives they connote, Moriyama proceeded to dismantle every type of photograph and eliminated emotional content by treating them as equivalently flat image fragments. In the early 1970s, as a result of his critical negation of photography, he experienced a fading of the photographer itself in the practice and felt divorced from the medium. Putting the definition of photography on hold, and in an attempt to break the current impasse, he began to shift away from magazine publication and towards showing prints in exhibitions, which he had hitherto avoided. Presciently responding to the increased value on original prints, he also became engrossed in silkscreen production.

Moriyama, who had been familiar with painting and design prior to photography, liked graphics and was influenced by Pop Art, which appropriated and codified images mechanically reproduced by and amplified through mass media. His particularly strong sympathy for Andy Warhol can be seen in Provoke no.3, which featured Moriyama's photographs of shelves of canned foods and bottled sodas that were then photocopied to eliminate gradation; and the 'Accident' series, in which he juxtaposted photographed images with re-photographed images from television and newspapers of accidents and incidents that symbolized the contemporary period. Moriyama also feels attached to half-toned figures and landscapes, which he has seen since childhood while walking through the city in printed matter such as posters, billboards, and film stills. He found an affinity in the half-tone printing process of silkscreening, a medium favored by Pop Artists working in the 1960s and after as Art was popularized.

In the Daido Moriyama Printing Show held in March 1974, he reproduced prints of images he had shot while he stayed in New York for a month with the graphic designer Tadanori Yokoo, and produced and sold copies of his book Another Country in New York with a silkscreened cover on site. Two months later, in the Harley Davidson show, he exhibited works comprising repetitions of the same images and a life-sized image of a Harley Davidson motorcycle printed with a giant photogravure plate.

Moriyama has explained that from time to time, 'I feel like distancing myself from photography and doing other things like silkscreening,' and continued to produce silk-screen works in subsequent decades. The printmaking technique of silkscreening has thus been an important means for Moriyama and his expansion of the field and possibilities of photography.

Daido Moriyama was born in Ikeda, Osaka in 1938. He first trained in graphic design before taking up photography under Takeji Iwamiya and Eikoh Hosoe as an assistant. He became an independent photographer in 1964, publishing Nippon Gekijō Shashinchō (Japan Theater Photo Album) in 1968 and Shashin yo Sayounara (Farewell Photography) in 1972; the work showed the darker sides of urban life and the city. He has had a radical impact on the photographic and art world in both Japan and in the West, with his expressive style of 'are, bure, boke' (rough, blurred and out-of-focus) and of quick snapshots without looking in the viewfinder. His solo exhibitions include William Klein + Daido Moriyama, Tate Modern, London (2012); On the Road, The National Museum of Art, Osaka (2011); Daido Retrospective 1965-2005 / Daido Hawaii, The Tokyo Metropolitan Museum of Photography (2008); Centro Andaluz de Arte Contemporáneo, Sevilla (2007); Foam, Amsterdam (2006); Fondation Cartier pour l'art contemporain, Paris (2003); Fotomuseum Winterthur (2000); San Francisco MOMA (1999, travelling to The Metropolitan Museum, New York). He is a recipient of The Hasselblad Foundation International Award in Photography (2019); the Lifetime Achievement award at the 28th Annual Infinity Awards from International Center of Photography, New York (2012); The Culture Award from the Deutsche Gesellschaft für Photographie, Cologne (2004); The Photographic Society of Japan Lifetime Achievement Award (2004); the Mainichi Art Award (2003) and the Japan Photo Critics Association Newcomer's Award (1967).

Sign up to be among the first to know when new exhibitions by Daido Moriyama or at Taka Ishii Gallery Photography / Film open.