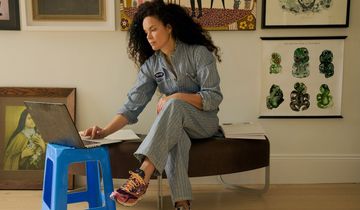 One of the most influential artists of the 20th century, Henri Matisse was a French painter, printmaker, sculptor, and draughts person, whose pioneering use of colour, line, and form led significant developments in modernism, mostly notably Fauvism.

Henri Émile Benoît Matisse was born in Le Cateau-Cambrésis in northern France, and grew up in the nearby town Bohain—a centre for weaving, textile production, and trading. Matisse initially trained as a lawyer and worked as a clerk, and in 1889, discovered a passion for painting while ill. He moved to Paris in 1891 to study art at Académie Julian (1891—1892) and the École des Beaux-Arts (1892).

Matisse began exhibiting his academic-style paintings in 1895. As he discovered new artistic movements such as Neoclassicism, Realism, Impressionism, and Neo-Impressionism in Paris and elsewhere in France, he began expanding his range of expression through light, colour, brushwork, and composition. The discovery of his contemporaries including Pablo Picasso, Paul Signac, and Henri-Edmond Cross is also acknowledged to have influenced Matisse's style.

Matisse is recognised as one of the key figures of Fauvism (1905—1907), an early avantgarde movement. Woman with a Hat (1905) was a portrait of the artist's wife painted in unnaturalistic, bold colours and expressive brushstrokes. When exhibited alongside works by André Derain and Maurice de Vlaminck at the Salon d'Automne in 1905, critic Louis Vauxcelles was inspired to name the movement based on the French word fauve, or wild beast.

Matisse referred to his Fauvist paintings as 'construction by coloured surfaces', and during this period produced some of his most well-known works, including Le Bonheur de Vivre (The Joy of Life) (1905—1906) and Blue Nude (Souvenir of Biskra) (1907).

In 1917, Henri Matisse moved to Nice, where he lived until his death in 1954. 1917—1930 is recognised as Matisse's early Nice period, where he primarily painted female figures and odalisques in ornate, decorative interiors.

In 1930, Matisse traveled to North America to sit on the jury of the 29th Carnegie International, whose first prize he had previously won in 1927. He further travelled around Tahiti, New York, and other American states before returning to Europe.

Matisse recognised his own practice as a search 'for the same things, which I have perhaps realised by different means.' He produced images of still lifes, figures, and nudes in varying styles across his lifetime, revisiting subjects and shifting his stylistic representation over time—from restrained abstracts in the 1910s, decorative interiors and figures through the 1920s Nice period, and the reduced abstraction and cut-outs of the 1930s, 40s, and 50s.

Matisse aimed to articulate the 'essential character of things', and achieve 'balance, purity and serenity' in his paintings. Though his works became increasingly simplified and apparently effortless, Matisse stressed that their success was the product of intensive consideration of colour, balance, space, and line.

Matisse first began exploring flattening and the paper cut-out method when commissioned to paint a mural for American art collector Dr. Albert Barnes. He used the technique to design the mural composition, which resulted in The Dance II (1932—1933), a triptych depicting abstract dancing female figures against blocks of flat colour.

From 1940, paper cut-outs became Matisse's primary artistic medium. The technique further developed when the artist had increasing hospital stays in later life as a cancer patient. Unable to paint, Matisse cut shapes from paper with scissors and directed his assistants to place the cut-outs on paper and canvas in collage fashion. This resulted in one of his most well-known series, the 'Blue Nudes' lithographs (1952—1954).

In 1963, the dedicated Musée Matisse opened in Nice. The museum houses one of the largest collections of Matisse's works spanning his entire career, including Les Abeilles (1955) and Fleurs et fruits (1952—1953).

Henri Matisse's artworks are held in collections across the world, including The Museum of Modern Art, New York; Baltimore Museum of Art; and Centre Pompidou, Paris.