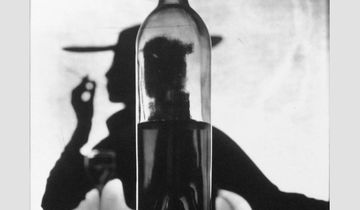 Irving Penn was an enormously influential fashion, portrait, and still life photographer whose commercial work was widely seen in magazines like Vogue or The New Yorker throughout the 1960s, 70s, and 80s.

Penn trained as a painter and designer at the Philadelphia Museum School of Industrial Art (1934–1938), while also working with Harper's Bazaar director and teacher Alexey Brodovitch on a student summer holiday job. Penn took a year off to do painting in Mexico, returned to do some graphic design projects in New York, and was then hired by Alexander Liberman to shoot cover images for Vogue.

Penn's streamlined, meticulously lit images with carefully positioned models quickly gained him a reputation for elegance and wit, be they on the cover, in articles, or in glossy advertisements. Many were in black and white, including Black and White Vogue cover (Jean Patchett), New York (1950); Debut Couture Shoot for Vogue (1943); Vogue, December, 1995 (1995); and Vogue, September, 1991 (1991). Some were in soft delicate colour, like the covers for Vogue U.S. November 1949; Vogue, May 1946; and Vogue, October 1943. Others combined the two, as seen in the covers for Vogue U.S., September 1983 and Vogue, December 1943.

He used a daylight studio with an old theatre curtain for the background, which created a diffuse, soft ambience. After he began travelling, he usually used a Leica camera.

On other occasions, he documented tradespeople working in London, Paris, and New York, the images appearing in the pertinent city editions of Vogue. See, for example, Small trades (1951).

In the late 1970s his enlarged images of discarded objects became popular, as did his shots of wilted or dead flowers. These included detritus such as the cigarette butts in Cigarette No.85 (1972) and Cigarette No.8, New York (1972), or the flowers in Poppy, Barr's White, New York (1968).

In 1964 Penn developed a distinctive darkroom technique, drawn from the 19th century, for making platinum-palladium prints. This involved using a cotton rag paper with ultraviolet light for contact printing and applying the platinum emulation with a brush. It creates usually soft, warm tones.

Penn's photographs have been published in several printed collections, including New and Unseen (1999), People in Passage (1992), Worlds in a Small Room (1974), and Moments Preserved (1960).

Irving Penn has been the subject of many and group exhibitions.

The Irving Penn Foundation website can be found here.

Sign up to be notified when new artworks and exhibitions by Irving Penn are added to Ocula.
Sign Up Login