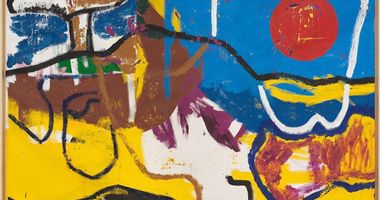 With a style that appears regressive, primitive and roughly executed, Joe Bradley’s paintings possess a child-like component that the artist describes as 'intentional shoddiness.' The subtle colour variations and surface texturing inject the paintings with a distinct character which, when hung together, emanate a strong energetic force. Bradley graduated with a Bachelor of Fine Arts in Painting from the Rhode Island School of Design in 1999. He now lives and works in New York, where he is well known for his monochromatic canvas paintings that depict figurations of humans, animals, places and objects through experimentation with Colour Field and Minimalism.

Bradley’s first solo exhibition Duckling Fantasy showed at Almine Rech Gallery, Paris, in 2011. The Museum of Modern Art, New York, acquired his painting Strut that same year. He has since had multiple solo exhibitions, including Lotus Beaters at Gavin Brown, New York, in 2013 and The SS Potlicker and Friends at Galerie Eva Presenhuber, Zürich, in 2014.

This year, FIAC is celebrating its 43rd fair at the Grand Palais, the Petit Palais, the Jardin des Tuileries, and the Place Vendôme. With works from 186 galleries spanning over 27 countries—the largest number of countries the fair has ever sourced from—and On Site, a brand-new sector for FIAC, the fair is set to stun visitors with new...

It’s FIAC Week! Whitewaller Paris brings you 12 things you should be sure not to miss this week. 1. FIAC October 20-23—8th arrondissement The 43rd edition of FIAC at the Grand Palais, the fair’s customary venue, is hosting this year 186 galleries from 27 countries and includes 43 newcomers, alongside well known spaces...

Sign up to be notified when new artworks and exhibitions by Joe Bradley are added to Ocula.
Sign UpLogin