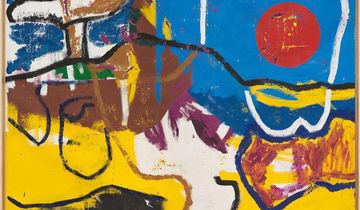 Joe Bradley is an American painter known for a number of styles, such as abstract expressionism, folk art-esque 'primitive' drawing, and a personal variation of minimalism.

Abundant in irony with his calculatedly 'shoddy' visual practice, Bradley likes to incorporate detritus, canvas offcuts, and dirt from the studio floor—often onto a drop cloth. He is also known as the former leader singer for the punk band, Cheeseburger.

Bradley was raised in Maine, and after visiting a friend in New England, he decided to enrol at the Rhode Island School of Design. There, he was mentored by Dike Blair, a sculptor and realist painter, and David Hornung, a colour theorist. Bradley graduated in 1999. Not long after, he was invited to have a museum show at P.S.1 Contemporary Art Center, New York in 2006, which launched his career.

Joe Bradley's paintings, though abstract, often vaguely allude to the flattened human form and are characterised by a nonchalance, an avoidance of highbrow seriousness or any hint of pomposity. This is particularly the case with his very large Art Informel or CoBrA-style paintings that have a European ambience, with their hot earthy colours, squashed shallow depth, and dense 'found' drop-cloth textures. See Vanguard (2018), Glad Song (2021), or Mistral (2021).

Bradley is also known for his use of monochromatic panels made of fragile store-bought stretchers. He has made paintings that reference Minimalists like Ellsworth Kelly, such as Police Painting 2 (2008), and freestanding, wide, box-like sculptures that recall Donald Judd, such as those included in his 2016 exhibition at Galerie Eva Presenhuber, Canton Rose. Many of his bold compositions that on occasion resemble human forms standing against the wall are warmly witty and evocative. See Untitled (2006) or The Fisherman's Friend (2005).

Bradley is a prolific drawer, presenting his drawings in large numbers, gridded on one wall, in close proximity to his paintings. They have a cultivated cack-handedness. He also has a deep affection for head comix. Mercurial in temperament and very articulate, Bradley likes to suddenly change direction and pull in unforeseen ingredients to challenge himself.

In 2008, Bradley held an exhibition at Canada gallery, New York that featured his very large 'Schmagoo Paintings'. These were simple, logo-like drawings greatly enlarged on big canvases with their imperfect attendant crud present and not removed. When explaining his thoughts, Bradley saw these badly drawn grease pencil images as spiritual.

As Bradley explains: 'I came across the word "Schmagoo" in a book about New York City drug culture in the 1960's, it was (is?) used as slang for Heroin. This struck me as kind of funny, that a narcotic as deep and dark as Smack could end up with such a goofy nickname. Sounds like a Jewish super hero or something. The word stuck with me, and I began to think of "Schmagoo" as shorthand for some sort of Cosmic Substance... Primordial Muck.' Examples include Superman (2008), Man Made Dirigible (2008), Untitled (2009), and Abelmuth (2008).

Joe Bradley has participated in many solo and group exhibitions.

This year, FIAC is celebrating its 43rd fair at the Grand Palais, the Petit Palais, the Jardin des Tuileries, and the Place Vendôme. With works from 186 galleries spanning over 27 countries—the largest number of countries the fair has ever sourced from—and On Site, a brand-new sector for FIAC, the fair is set to stun visitors with new...

It’s FIAC Week! Whitewaller Paris brings you 12 things you should be sure not to miss this week. 1. FIAC October 20-23—8th arrondissement The 43rd edition of FIAC at the Grand Palais, the fair’s customary venue, is hosting this year 186 galleries from 27 countries and includes 43 newcomers, alongside well known spaces...