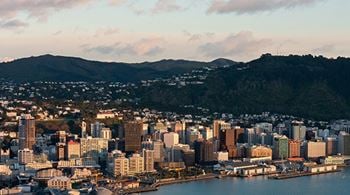 Wellington, as the capital of New Zealand, is not only the host city for the country's parliament and various civil service organisations, but also the Museum of New Zealand, Te Papa Tongarewa. The institution on the waterfront houses national collections presenting Science, Art, and Social History. In March 2018, the new national art gallery Toi Art opened on the fourth and fifth floors of Te Papa, which has since exhibited the works of established New Zealand artists such as Tiffany Singh, Jeena Shin, and Kerry Ann Lee.

City Gallery Te Whare Toi in Te Ngākau Civic Square is administered by the city of Wellington, much smaller than Te Papa, and without a collection. Veteran curator Robert Leonard leads its team of curators to present an exhibition programme known for its dynamism and social currency.

A significant public institution funded by the Hutt City Council is The Dowse Art Museum, which is home to over 2,000 artworks. In keeping with its inaugural exhibition that focused on a survey of New Zealand art (Artists of the Wellington Province 1939–1971 [1971]), the Museum has displayed the works of both accomplished and emerging New Zealand artists, notably Fiona Clark, Shannon Te Ao, Ella Sutherland, and Imogen Taylor. Its extensive public programmes also include interactive and educational workshops that aim to bring the community together.

The most important venue in Wellington, in terms of scholarly research and debate about contemporary art, is the Adam Art Gallery Te Pātaka Toi. Part of the Victoria University of Wellington in Kelburn, the gallery is housed in a building designed by architect Ian Athfield. Under the directorship of contemporary art historian Christina Barton, it is a venue more rarefied in its interests than City Gallery. Another notable university gallery, The Engine Room, is at Massey University. Run by Litmus (a 'cutting edge' research hub), the smaller and less conspicuous gallery is aligned with artists' projects and a residency for international visitors.

Enjoy Public Art Gallery is a successful artist-run space (operative since 2000) that is not a 'public' gallery in the sense of a conventional, municipally administered institution, but much more pitched to the interests of recent graduates. Social and community oriented, it has a profile so slick that it appears corporatised, especially as it now has a brand new and much larger space in Cuba St. Its workshops places a big emphasis on creative writing and mentoring as an aid for developing critical art practices.

Nga Tāonga Sound & Vision (The New Zealand Archive of Film) is an organisation devoted to the national promotion of moving image and aural culture. Its collection encompasses popular mass media such as film, radio, and television, and the histories of the different communities that live here. Although it presents a lot of material online, it has curated exhibitions—to be seen, for example, in its Wellington branch in Taranaki St—that include videos, printed matter, and artefacts connected to the production of stories disseminated through Aotearoa's mass media.

There are about a dozen dealer galleries in Wellington. The pioneering Peter McLeavey Gallery launched the careers of historic icons Colin McCahon and Toss Woollaston in the mid-sixties. Page Blackie Gallery, in Victoria St., has a wide range of styles within the mediums of painting and sculpture, extending from senior figures like Max Gimblett, Dick Frizzell, and Andrew Drummond to younger postcolonial artists like Jasmine Togo-Brisby and Reuben Paterson who reflect Pasifika and Māori sensibilities.