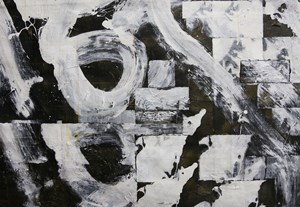 The spring of 2018 is approaching. In this warm season, A Thousand Plateaus Art Space will bring two solo exhibition of two emerging artists Feng Bingyi and Wang Jun. As the spring brings hope to people, their works construct a world that belongs to themselves with the great courage, they curry their faith, reason, and the groundbreaking view of the world to complete the creation for this exhibition, and this is only a small part of their long creative lead. The respective main parts of their exhibitions are also made up from their own narratives.

Below is the introduction of Wang Jun's solo exhibition, let's take a look: Wang Jun believes that it is the artist's mission to create a force of deportations and rounding, to capture the uncertain but apprachable 'real core'. The 'core' is wrapped in a sphere, and the artist's creation is to squeeze the sphere from all its aspects. Hence, the ball will roll, transfer and spin with the force of dragging, and it will show the different movements in the motion of the parabola. The Sphere's movement makes the language of painting and the object of expression has always been full of tension. The sphere might never be pricked, but the chasing, the evasion, and the mutual oppression and attraction between the sphere and the artist might be the core of the art, as the perpetual state for the artist. Wang Jun's practice of contemporary new paintings in the 21st century makes him explicitly sort out this intention, and turns it into a serialized way of organising the painting languages.

In this solo exhibition, Wang Jun approaches and captures this sphere from different sides in three different series or methodologies, attempts to present the sphere more explicitly in a concerted manner.

Firstly, as a rumination and question of the image itself, 'copy practice' is the longest-lasting (2008–present) series of Wang Jun. Initially, it began with the deliberate copying of randomly generated impromptu strokes, and later it developed to be the variations serialised images by the same film Photo. In this new work, he directly introduces the provocative and self-provoking words that constitute a jocosity visual mirror. Above all, this is the vigilance on himself as an artist, as well as an image maker, and it is also a test of the audience's perception.

The second part started with the collaboration with the British poet Philip Davenport a few years ago, and the text has always been the clue of Wang Jun's recent creation. 'Untitled (Nonsense)' comes from the works by Huang Xiang, a pioneer poet from Guizhou, that resisted and repressed the awakening of human nature. The work includes a large-scale felt painting, the outdoor final picture, and relative visual poetry.

The third part draws attention in golden color. Under the shining appearance, these works conceal the borrowing from daily discourses and challenge his and the audiences' senses with the relation of 'visible' and 'invisible', 'bright' and 'dark'. What do people expect to see while viewing the painting? Starting from this question, the series of this work unfold the discussions of painting as a commercial product, point out the dual identity of painting in contemporary commerce and academic contexts and the resulting viewing styles.

These three parts works seem different and most of them involve the use of words, constituting the main body of this exhibition, while with a unified inner texture reflecting Wang Jun's stage result. Through the backlog way, he tries to engrave the viewable 'epidermis' and the intertextuality between its parcels, languages and images, and the works onto the 'painting" sphere. This is also part of his ongoing response to the term 'painting."

Sign up to be among the first to know when new exhibitions by Wang Jun or at A Thousand Plateaus Art Space open.
Sign Up