Few people know that Salvo, noted above all for his landscape views, was affiliated with the Arte Povera movement beginning his career in the vivid arts scene of Turin.

From this period are the photographic self-portraits, the Tricolore which write 'Salvo' in red white and green in neon lettering and the marble tombstones with engravings, where the artist himself takes centre-stage in a hyperbolic and ironic way (Io sono il migliore, I am the best, and Idiota, Idiot).

In 1973, he proceeds with this search of the Self in the works known as d'après: They are citations from old master paintings with classic iconographic subjects in which he replaces the hero's face with his own. Salvo continued this ironic celebration of the Self in Italie and the Sicilie. At the end of the '70s, there is a visual change in his research that results in a series of landscapes, portraits and still lifes of incredible depth, saturated colors and nuances.

He depicts horseman amidst architectural ruins and visions of classical columns seen at different times of the day and night. From this point, the attempt to capture the different light situations of the seasons and months becomes central. The places where he lived and worked serve Salvo as a source of inspiration for the infinite variety of his paintings. This becomes even more evident in the '80s, when he paints typical Muslim graves as well as minarets (a series Salvo will call Ottomanie) that are remembrance of his journeys to distant places that he will continue in the '90s. The works of the cycle of Primavere (Spring), Autunne (Autumn) and Inverni (Winter) which date back to the mid-1990s become recurrent themes in the following decades. In the 2000s, he dedicates his works to other journeys, especially those to China, Thailand, Egypt and Iceland. During these years his painting embraces the subject of the lowlands, and he introduces a new perspective in his landscapes. From 2013, he goes back to some of the subjects that marked the beginning of his artistic career, including a large map of Italy and Sicily. 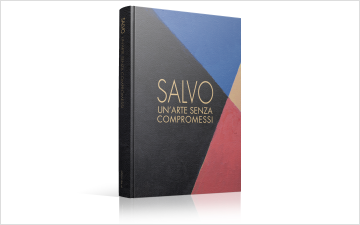 Salvo An art without compromises