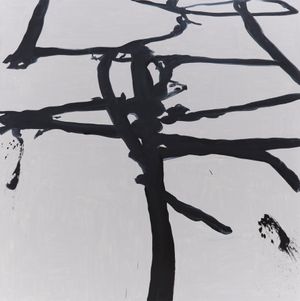 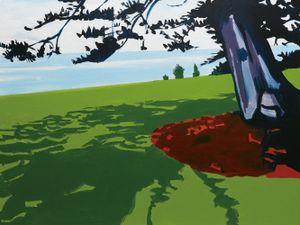 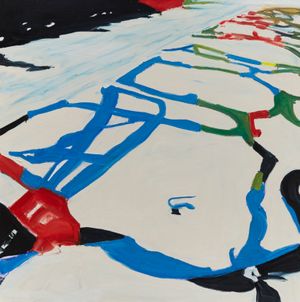 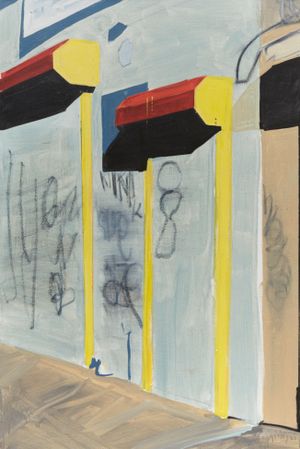 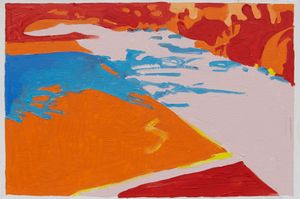 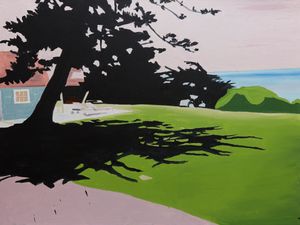 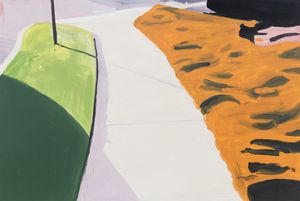 Gallery Baton is pleased to announce In Between Memory and Dream, a solo exhibition by Koen van den Broek (b. 1973) from 21 April to 28 May in Hannam-dong, Seoul. Koen van den Broek has established his current growing presence by developing his own style crossing the boundary of the figurative and abstract, as one of the leading artists from Belgium, a historically significant repository of paintings over centuries and a pivotal place of the European contemporary art.

He studied architecture before completing MAs in Painting at several universities including Higher Institute for Fine Arts in Belgium, explores figurations of urban constructions such as signposts, car parks, grid-pattern pedestrian passages, bridges and borderlines of roads easily discovered in cities and their peripheries. 'The sheer strength of observation' he has developed as an artist consequently enables him to concentrate on manifesting the traits and significance hidden in symmetric elements and colours of the targets instead of simply regarding them as a substitute framework supporting the city to appropriately function. For example, primary colour swatches of his 'Border Series' cut across the entire planes; they are a representation of the paint often applied on many structures adjacent to roads. The colourful paint whose common role is warning for the efficient traffic stream of vehicles and passers-by transcends its original purpose through the artist's authentic interpretation and it eventually converts the aesthetic appreciation into a subject.

His Polaroid camera he always carries while travelling is essential equipment to bring ephemeral memories—the bleak landscapes or the quiet and serene sceneries of rural areas he encountered in the western US—to his studio. He takes photographs of the scenes hundred times as if he collected creatures and then he disembodies or reconstructs them to project his new perspective into the sceneries; these seemingly ordinary landscapes are divided by his distinct style and eventually implanted onto a canvas. In this process, the most crucial aspect is Koen van den Broek's extraordinary pictorial approach. Although the colours and scenes achieved by the coexistence of quick strokes and carefully organized compositions seem simple in a glimpse, they can hardly be described in a typical language. Thus, the poetic ambience and aesthetic mode conveyed in his paintings obtain the more mysterious vitality as they can be neither easily delivered nor clearly explained. His practice not tied down by any political implications or social messages allows us to re-contemplate the intrinsic value and ultimate aim of fine art.

The exhibition also introduces a number of Van den Broek's new paintings beautifully depicting the harmony of nature and architectural features from his own viewpoint, insomuch as it can even have such a subtitle, 'Contemporary Idyllic Landscapes.' They provide unexpected composure and warm attention in contrast to the conceptual, intense and abstract characteristics of the other displayed works whose lines and faces have notable saturated colours and evident cracks dynamically divide up the given surfaces. It shows that the explicit statement, "To create a work of art is to create the world", by Wassily Kandinsky (1866-1944) is still available in the works of Van den Broek despite the gap of nearly a century.

Being combined with his visual sensibility and original analysis, the landscapes which remain as photographs and their particular tones and uncertainty revealed only through the Polaroid camera not only create a new dimension of elevated sensitivity but provide the higher level of an uplifting idyllic experience difficult to come across within the recent environments of contemporary art.

In Between Memory and Dream

Sign up to be among the first to know when new exhibitions by Koen van den Broek or at Gallery Baton open.
Sign UpLogin