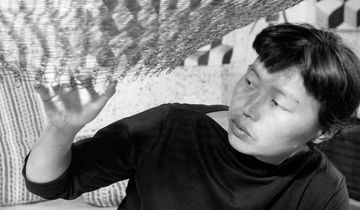 Ruth Asawa was a Japanese-American artist known for her ethereal sculptures woven out of metal wire, often hanging vertically from the ceiling and evoking bubbles or birds' nests. Working with her hands, which went against the preference for prefabricated industrial materials of the 1950s and 60s, Asawa defied categorisation and presented an alternative vision for artmaking.

Born in 1926 to Japanese immigrants in California, Asawa's early life was affected by discrimination and xenophobia in the U.S. As a teenager, she was forced to go into Japanese internment camps during World War II; as a young adult, she discovered that her dream of becoming an art teacher would be difficult to realise because of her ethnic background.

In 1946, Asawa enrolled in the legendary Black Mountain College, where she studied under such artists as the former Bauhaus academic Josef Albers. During the three years she studied there, Asawa produced mainly abstract drawings and paintings and the institution's experimental spirit would have a lasting influence on her practice.

It was Asawa's trip to Mexico in 1947, where she undertook lessons with local weavers, that inspired her iconic metal sculptures. Fascinated by the transparency of the wire baskets she learnt to create, the artist developed these into various forms, working with brass, copper, and iron wire, ranging from isolated spherical and triangular shapes to intricate cage-like forms that overlap or encase one another.

Asawa's experimentation with metal wire sculptures expanded to forms modelled after life. Her tree-like sculptures were made by twisting wires outward from the centre, while she soaked tied-wire pieces in sulfuric acid for prolonged periods to create electroplated sculptures that recall the shape of corals.

Asawa moved to the San Francisco Bay area in 1949, where she lived and made resounding contributions to public art and art education until her death in 2013. Andrea, her first public commission, was installed in Ghirardelli Square in 1968, the same year that she co-founded the Alvarado Arts Workshop with her friend and architectural historian Sally Woodbridge. In 1982, the artist helped found a public alternative high school in San Francisco, which was renamed the Ruth Asawa San Francisco School of the Arts in 2010.

After decades of obscurity, Asawa began to gain wider recognition with The Sculpture of Ruth Asawa: Contours in the Air (2006), a survey exhibition at de Young Museum, San Francisco. Renewed interest in her work has been followed by Ruth Asawa, a major solo exhibition by David Zwirner in New York (2017), which has represented her estate since, and Life's Work at the Pulitzer Arts Foundation, Missouri (2018). In 2020, the United States Postal Service (USPS) issued a set of stamps featuring Asawa's sculptures.

Read More Ocula Feature Venice Post-Mortem: Reflections on The Milk of Dreams* By Stephanie Bailey The Milk of Dreams, curated by Cecilia Alemani, is like a river, save for a few blips, with some unforgettable moments.

Read More Ocula News Venice Biennale 2022 to Reframe Art History as a Story of ‘Symbiosis, Solidarity, and Sisterhood’ Venice, 4 February 2022 The event's main exhibition will explore the representation of bodies and their connections with technologies and the Earth.