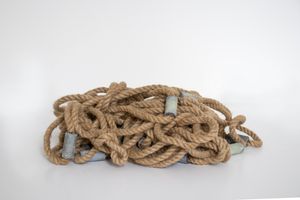 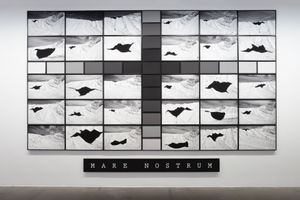 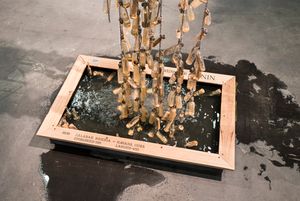 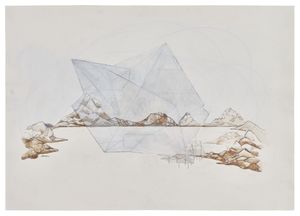 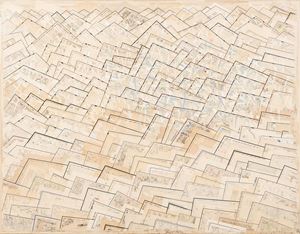 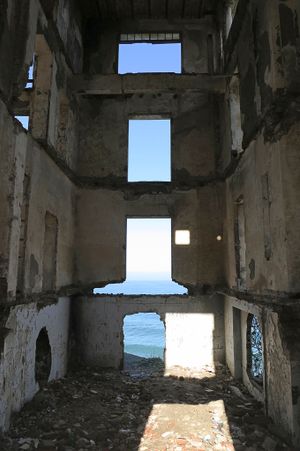 Fathom /ˈfað( )m/ (noun) a unit of measurement of the depth of water. (verb) an attempt at making sense of something difficult to comprehend

Goodman Gallery is pleased to announce its participation in Galleries Curate: RHE, the first chapter of a collaborative exhibition and online platform that brings together twenty one galleries from across the globe. Water, a universal and unifying subject matter, is the basis and starting point for each of the participating galleries’ exhibitions.

Fathom, Goodman Gallery’s contribution to RHE, takes the form of a group exhibition of artists working across a range of media including collage, land-based intervention and sensory installation. The coastline, seen here as both a physical and symbolic framework, forms the vantage point and undertow of the exhibition. As the intersection between land and sea, the coastline represents both a territoriality, and a boundlessness. Inscribed with stories that bear histories of occupation and freedom, coasts are loaded with cultural significance. As a counterpoint, they also appear to be infinite, extending beyond the horizon.

Alfredo Jaar’s Searching for Spain (2012) reflects the unprecedented immigration crisis of our time. Jaar photographed the ocean from the viewpoint of an abandoned palace in Algiers, the capital city of Algeria. The palace, today a hiding place for immigrants before a journey across the Mediterranean, faces the direction of Spain. Pamela Phatsimo Sunstrum’s Monolith III is a drawing of a landscape that appears simultaneously imaginative and representational. A precipitous mountain range is delicately mapped along a coastline, enclosing a large polyhedron shape. Beneath the surface and within the body of this central structure are visible traces of pentimenti.

Kiluanji Kia Henda finds a point of contact between an imagined coastal landscape, and a geopolitically laden site. Mare Nostrum (Black Birds) (2019), is an assemblage of black and white inkjet prints, depicting the expansive salt piles in Arles, extracted from the Mediterranean Sea. Historically, the Mediterranean is a site of development for civilisations and solidarity between different cultures. It is also a place of death and disappearance. Kia Henda intervenes with sections of the salt reserves by covering them with a large black sheet. Photographed at varying angles and distances, the sheet appears and disappears, an abstract form that migrates across the horizon.

Through a physical process of fragmentation, migration and collage, Gerhard Marx disrupts the boundaries and hegemonic claims inherent in maps, that allow for a consideration of landscape as social construction. Particles (2020), continues Marx’s engagement with discarded and decommissioned Cartographic Archives, where maps are incrementally cut loose from their original purpose and reassembled into a new and immeasurable spatial imaginary. Within the restrictive surface-area of each canvas, Marx sets himself the task of exploring the possibilities of describing depths, volumes and distances. Jeremy Wafer’s sculpture Fathom (2021), the exhibition’s titular work, is a thirty-meter length of rope upon which plugs of lead are cast in one-meter intervals. The work references a sounding line, a length of gradated line with a lead weight that is cast into water to measure its depth. Fathom is part of a series of ideas Wafer is currently working with that reflect on burials at sea.

Messages from the Atlantic Passage V (2017), by Sue Williamson, is a large-scale installation based on the accumulated records from both sides of the Atlantic, during the late history of slavery in the 19th century. Suspended from the gallery’s ceiling, engraved glass bottles and fishing nets fall into a pool of water, representing specific voyages from West Africa across the Atlantic.

Dor Guez’s Letters from the Greater Maghreb (2020) will be featured in the online presentation of the exhibition. Born into a family of Palestinian and Tunisian Jews, Guez explores chapters of his own layered history to expose connections and subversive undercurrents. In the work, Guez draws on a precious manuscript, handwritten by his grandfather, in Judeo-Tunisian Arabic. After escaping concentration camps in Nazi-occupied Tunisia, Guez’s grandparents immigrated to Israel. During the arduous journey through the Meditteranean, personal documents were damaged by water leaked from the belly of the boat. Guez creates enlarged scans of the ink soaked pages, bringing the meaning of the original words simultaneously closer and farther away.

Sign up to be notified when new artworks and exhibitions at Goodman Gallery are added to Ocula.