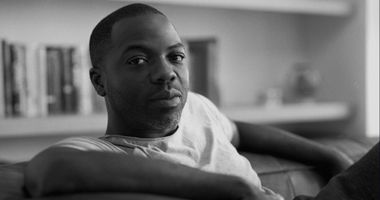 Known for his richly textured tableaus of generic African- American athletes, sports stars, and performers, New York artist Derek Fordjour examines the expectations and archetypes of Black performance in America, as well as their psychological impact.

Born in Memphis to Ghanaian migrants, Fordjour's passion for art started in Memphis Central High School. Encouraged by his high school art teacher, Fordjour initially attended the Pratt Institute College of Art and Design but soon dropped out to move to New York.

A brush with the law in Brooklyn later led Fordjour back to his formal art education. During his BA at Morehouse College, where he graduated in 2001, Fordjour found early direction for his practice in a course on African-American art history.

Following the completion of an MA in Art Education at Harvard in 2002, Derek Fordjour returned to New York, where he took on portrait commissions and worked in the studio of Mickalene Thomas. The fractured surfaces and bright colours of Thomas' work is a noticeable influence in Fordjour's paintings, which employ bold colours and textural surfaces. By the time Fordjour completed his MFA at Hunter College in 2016, which was supervised by sculptor Nari Ward, he was already exhibiting in solo gallery shows in New York city.

A lack of resources in the early stages of his career led Fordjour to work with materials like cardboard, foil, and newspaper—specifically, the salmon-hued Financial Times. These quotidian materials continue to be a feature of Derek Fordjour's paintings and installations.

Fordjour's use of non-art materials is evident in his mixed-media installations like Triumvirate (2019) and Birmingham Steel (2020). In Fordjour's paintings, the artist makes use of simple materials in a collage-like technique to create a richly textured, colourful surface. Around ten layers of newspaper and coloured cardboard are applied before washes of paint are added on top. Fordjour then paints his figures in acrylic and oil pastel, while reworking the uneven surface with incisions, tearing and peeling to reveal the hidden depths beneath the vibrant surface in a process of 'excavation'. On his approach to installation, Fordjour explains in Ocula Magazine, 'The transformative power of world-making in art is something that I want to deliver to people. It's almost like an act of love to say change your realm, come in and leave it all behind... Take a ride.'

Fordjour's figures—painted in large crowds and smaller solo portraits—are generic archetypes of Black success. They are nameless jockeys, rowers, professional basketball players, dancers, and drum majors. The athlete donning the No.85 orange-striped jersey in No.85 (2014) is simultaneously elevated in his sporting accomplishments and reduced to an anonymous number, highlighting the ambiguities Black athletes and performers navigate in their success. Through his work, Fordjour highlights how success as a Black American in these fields comes with its constraints in being subservient to society's expectations.

Prompted by the events of 2020, including the pandemic and the high-profile police killings of Breonna Taylor and George Floyd, Derek Fordjour's painting went in a new direction. In the wake of such loss, his attention turned to Black grief, mourning, and funeral traditions.

These paintings replace the anonymous archetype with specific people: Pall Bearers (2020) examines opulence in funerary ceremonies through the specific lens of George Floyd's elaborate funeral; Chorus of Maternal Grief (2020) presents a commemorative ensemble of 14 Black women, including the mothers of Emmett Till and Breonna Taylor, whose personal loss has propelled them to public roles.

Beyond the gallery space, Derek Fordjour has made commissioned works for New York's public spaces. These include Half Mast (2018), a mural made for the Whitney Museum Billboard Project, and Parade (2018), a series of mosaics celebrating Harlem's parade tradition, commissioned by New York's Metropolitan Transportation Authority for the 145th Street subway station.

With his career on the rise, Derek Fordjour, a critically acclaimed painter known for images which grapple with the complexity of race in American society, has joined a new gallery: the Los Angeles–ba

Let's begin with a few anecdotes: Martellus Bennett, a National Football League player on the New England Patriots, claims that the NFL stands for 'niggers for lease,' arguing that management and leag

Be among the first to know when new artworks and exhibitions by Derek Fordjour are added to Ocula.
Sign Up Login