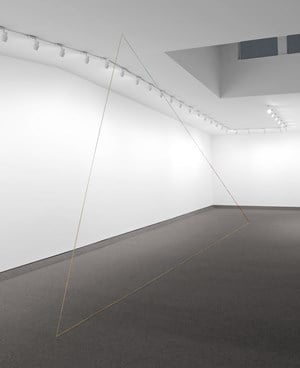 Three large-scale screenprints by Josef Albers and one three-coloured triangle by Fred Sandback provide the entirety of this seemingly spare exhibition that presents simple geometric experiences that are both present physically and involved in one's mind.

Josef Albers's three works from the 'SP' series of 1967 utilise monochromatic planes of colour so as to present situations where the characteristics of each colour are highlighted and each colour is of service to its neighbouring colours (hence the title of Albers' iconic text The Interaction of Color). Albers paid particular attention to the hue, tint, tone and shade of each colour. The idea of contingency is central to Albers' exploration.

Fred Sandback's 1988 sculpture, Untitled (Triangle with a Broken Leg) is a triangular form that is defined, each time it is installed, by the height of the room. Two sides are off-white yarn, while the third is two colours (teal-ish and reddish) looped together. Each side is a different length, and the length of the third side is not evenly divided between the two colours. Experiencing the piece consists of noticing the overall form (triangle), the materials used (three different colours of yarn), the relationship of the piece in the gallery's space and, lastly, a viewer's relationship, physically and psychically, to the piece in the space. An invisible plane can be felt and the particularities of a room are more noticed and yet the artist 'just' used acrylic yarn. Through an extreme economy of means, Sandback creates a captivating experience.

Both artists explored large and small ideas with seriousness and levity. One hopes that the opportunity to explore such a pairing can bring further understanding to two great artists of the 20th century.

In addition to the works on view, the gallery has a small group of Sandback's early and rare drawings, along with a selection of Albers' other editioned works.

Sign up to be among the first to know when new exhibitions by Josef Albers, Fred Sandback or at Krakow Witkin Gallery open.