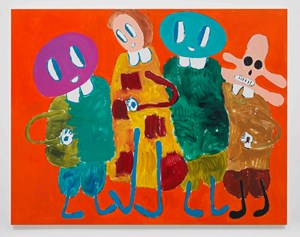 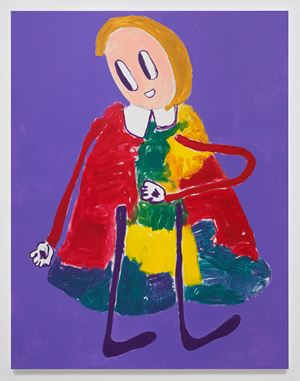 Metro Pictures presents an exhibition of nine large, vibrant new paintings by artist André Butzer. In a striking reversal from his last exhibition at the gallery, which featured mostly black, largely monochromatic works titled the N—Bilder [pictures], Butzer's latest paintings employ vivid colour and his signature figures. The new works bring to mind motifs and approaches that predate the stark abstraction and distinctive brushwork of his N—Bilder, begun in 2010, though Butzer asserts that everything he does is unified by an exploration of colour and that this is a natural continuation of his work. He says, 'Nothing was ever not about colour. Colour is a potency, a fusion. The blacks and light were colour, too. I only left things behind in order to reach a limit to return from. I consider myself a colourist.'

Produced after Butzer's recent move from his native Germany to Los Angeles, where he primarily paints outside among the elements, three of the spirited new works feature recurring figures that could be described as a cast of disfigured Disney characters. Other canvases incorporate sensuous tangles of flat cable-like lines that permeate rich pictorial fields of pigment. 'What I see are proportions of colour and therefore light. No figures. I also don't see such things people identify with what they think is abstract. Abstraction has become a naturalism in itself. I try to organize and measure paint, color and light. Sometimes to me the ones with figures in them just look like pink, red or violet monochromes!'

Pushing the limits of his oeuvre, the exhibition continues Butzer's longstanding investigation into the medium of painting and furthers the ideas explored throughout his career—from art history to consumer culture. In one mesmerising and monumental blue canvas, multicolored lines and biomorphic forms converge in a chaotic dance that seems to leave no trace of recognisability. The work is the closest Butzer feels he has ever come to Mondrian (one of the many influences on the artist's practice), transcending the dichotomy of reality versus representation and leading to a new space of light and color.

Sign up to be among the first to know when new exhibitions by André Butzer or at Metro Pictures open.