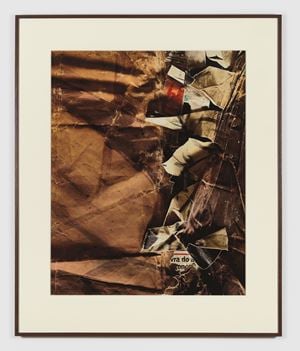 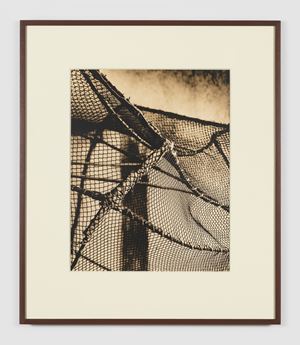 Simon Lee Gallery is proud to announce a solo exhibition by the London-based Portuguese artist, João Penalva. For his first solo exhibition in New York since 2002, Penalva presents two new series of work based on photographs taken at the São Carlos National Theater, in Lisbon, Portugal, that explore the physical mechanics of theatrical fictions and illusions.

Following a career in dance, João Penalva began his second career as an artist in 1976, working initially as a painter. Today, Penalva is known for making large-scale installations in various media, as well as more intimate works that combine painting, photography, video and found objects, image, text and sound; addressing narrative modes and the relationships between each medium. His storytelling is often fractured, presenting juxtaposed narrative elements, allowing the viewer a latitude of freedom in their interpretation.

In the gallery space, two seemingly disparate series of photographic works are presented side by side, in juxtaposition, as if conceived as two superimposed exhibitions. Presented along one wall of the gallery, the curious installation of alternating works, oscillating in scale, process and form, creates a rhythmic installation that explores the ambiguous relationship between fact and fiction, and the tenuous line that separates the two.

The larger series of colour images are archival pigment prints on paper depicting close-up photographs of various scenic backdrops. In a theatrical context, mediated by distance, the lights, the atmosphere, the characters, the music, and the voices, the painted backdrop is a key mechanism employed to create illusion and spectacle. In Penalva's works, and within the framework of the exhibition, the backdrops take on a revised physical presence. The tightly cropped works create a new sense of illusion and intimacy; fictions that celebrate the materiality of the fabric and that stimulate our imaginations. The brushstrokes that are, when viewed from afar, small gestures of a larger painted surface, here, using the apparatus of the gallery, gain the authority to define ambiguous, painterly compositions.

Interspersed between each of these works are smaller, silver gelatin prints that document objects found by the artist in the theatre's scenic prop store. From milk churns to a leather armchair, electrified candlesticks, a bird-hunter's cage, some wings, a vase with a shelf on top and a bronze urn on its side, these props, when removed from their theatrical context, become enigmatic objects that are undefined by time and belong only to the space of their photographic representation.

In this exhibition, as so often in Penalva's practice, text is used to form the narrative framework of his works. Here, technical descriptions are used to title each work, yet they do not reveal the play, opera or ballet that these backdrops or props belong to. In doing so, Penalva constructs an equivocal relationship between factual and visual information, a strategy that lies at the heart of theatrical production, as well as the artist's own practice.

Sign up to be among the first to know when new exhibitions by João Penalva or at Simon Lee Gallery open.
Sign Up
}