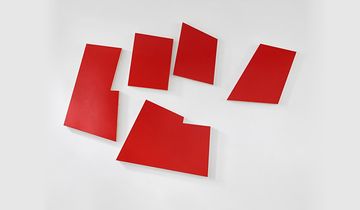 Imi Knoebel is known for his simple yet evocative visual language that blends colour with geometric shapes. Painted or installed, Knoebel's artworks delight the eye through their unexpected compositions.

Born Klaus Wolf Knoebel in Dessau, Germany, Knoebel studied Applied Arts at the Darmstadt School of Arts and Crafts (1962—1964), following the theoretical studies of Johannes Itten and Lászlo Moholy-Nagy of the Bauhaus movement.

The artist went on to attend the Dusseldorf Art Academy, where he studied alongside German abstract painter Blinky Palermo under Joseph Beuys.

Made from simple materials and with 'pure perception' as their guiding ethos, Imi Knoebel's paintings and installations communicate sentiments across form and colour.

While studying under Beuys, Knoebel made Raum 19 (1968). Named after his studio at the time, this large-scale installation consists of 184 pieces of wood and fibreboard, including frames, cylinders, and cubes, which can be stacked, layered, and reconfigured in multiple ways.

Unpainted and untreated, Raum 19 paved the way for the neutral, pared-down works that would follow, all of which would prioritise form over idea. In the artist's own words: 'When I am asked about what I think when I look at a painting ... I look at it and can only take in the beauty, and I don't want to see it in relation to anything else.'

During his studies, Knoebel grew more interested in high modernist principles, including the relationship between space, pictorial space, and colour.

Later geometric paintings like the 'Kinderstern' ('Star for Children') series (1988—ongoing), which includes imperfect star shapes painted bright colours, depart from a strictly reductionist stance through the addition of colour while retaining the simplicity of familiar forms, recreating a toy block a child could play with.

Just as understated, An meine Grüne Seite 07-29 (2007), a white tent-like construction made from two boards propped against each other with the interior painted orange, appears almost sculptural in nature as it renounces the boundaries of the canvas.

Knoebel is further known for his 'Messerschnitt' ('Knife Cut') paintings, a distinct painting style on paper that results in a cacophony of abstract shapes rendered in complementary colours, each partaking a dialogue with the next without ever touching the other.

Amongst them, Messerschnitt (1977) depicts morsels of brown aside curling red strips and hybrid triangles painted pink, showing the odd shapes in perfect harmony against a white background.

In Knoebel's work, shape and colour alike arouse sentiments of liveliness and nostalgia in the viewer, which are emphasised by the simplicity of the artist's subject matter.

Resulting works like LUEB Go 1276w (2013), strips of colour plastered on a pink oval aluminium board, hint at a sense of playfulness while offering a sober contemplation of visual and formal interactions through its careful composition.

In 2016, Knoebel was awarded the insignia of Officer of the French Order of Arts and Letters. He was also awarded the Kythera Prize in 2011 and an honorary doctorate from Friedrich Schiller University, Jena, Germany.

Imi Knoebel's work has been exhibited in solo and group exhibitions worldwide.