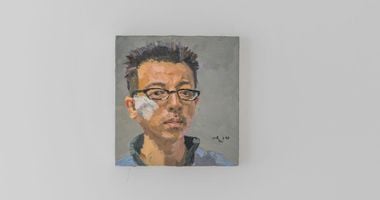 Best known for his realistic and humanising paintings of everyday people in politically complex places, Beijing-based painter Liu Xiaodong (刘小东) is concerned with those left behind by modernisation and globalisation.

Born in 1963, Liu graduated from The Central Academy of Fine Arts (CAFA) in Beijing with a BFA in 1988 and an MFA in 1995, and is considered a representative of China's 'New Generation' of artists, along with his wife, the figurative painter Yu Hong. His realistic style is influenced by his training in Socialist Realism at CAFA, a government-prescribed movement that focused on the conditions of the workers and was closely associated with the values of the Chinese Communist Party. Rejecting the propagandistic connotations of the genre, Liu retained the disciplined, formalist teachings to explore the idiosyncrasies of contemporary life in China and beyond.

Liu's approach to contemporary art is something of a nomadic, anthropological one. Adopting the methodology of the 'plein-air' painters of yesteryear, Liu sets up his easel on location to depict his subjects in their own environments. Domestic spaces, restaurants, pool halls, industrial sites and fields make up a few of the settings for his loosely painted portraits. Liu has described his modest methodology in four steps: 'Take some scaffolding; cover it in canvas to create a 10-square-metre pavilion. Paint inside, and when finished, take it apart. This is my studio.'

Through this process, Liu goes to great lengths to record the type of ordinary people not historically represented in oil paintings. In conversation with Ocula Magazine in 2016, Liu said, 'I only go into other people's lives to experience them. ... I don't want to summarise; I don't want to make a political stance. I want to just faithfully reproduce other people's lives.' As an example of this effort of representation, his 2012 'Hotan Project' series depicted scenes from the jade mining region of Xinjiang Province, while other works have depicted populations displaced by the Three Gorges Dam in the Yangtze River, Israeli-Palestinian conflict zones, South African landscapes, tableaux from Tibet, Bangladeshi steel workers and the private lives of sex workers and farmers.

His often large-scale artworks are at once both realistic and inventive, with form being rendered through thick, impasto applications of oil paint. One of his most well-known paintings, Out of Beichuan (2010), depicts seven young women among a shambled Sichuan landscape that had been hit by a devastating earthquake two years prior. With a conscientious attention to their humanity, the women are rendered with careful, distinctive features, while the hills and piles of rubble behind them are painted with chunky, staccato strokes. Similarly, the double-portrait Xiaojun and Xiuling (2015) depicts two figures in pink, fleshy paint, while the impervious highway and sky behind them are rendered in dull greys, contrasting vibrant life with impartial infrastructure.

Branching out from traditional methods of painting, in 2016, Liu presented Weight of Insomnia at Chronus Art Center in Shanghai: a mechanised installation in which robotic arms rendered images fed from distant security cameras in blue paint in the gallery. These cameras were positioned near the Bund in Shanghai, the Apple Store in Beijing's Sanlitun area and a public plaza in the artist's hometown in Liaoning Province. Removing his own hand from the work, Liu explored technology's rendering of time. As he relayed to Ocula Magazine, he 'wanted to show people the painting process, which is full of surprises. It can even be considered a performing art. It's very humorous and lively.'

The project was not Liu's first experimentation with moving image; his practice has always had close ties to film. In 2006, renowned Chinese director Jia Zhangke shot the documentary Dong, which followed Liu as he painted male labourers near the Three Gorges Dam in Fengjie, China, and later, young women in Bangkok, Thailand. Lingering on the marginalised people in both locales, Jia's film functioned less as a portrait of the painter and more as a considerate portrayal of his disenfranchised subjects. Liu also starred in Wang Xiaoshuai's directorial debut The Days (1993), acted as art director for Zhang Yuan's Beijing Bastards (1993) and was the subject of Hou Hsiao-Hsien's 2010 documentary Hometown Boy, which followed the artist as he returned to his rural hometown to paint his family and friends.

Liu currently lives and works in Beijing, where he teaches painting at CAFA.

Throughout Liu Xiaodong's body of work showing at UCCA Edge, the artist presents 'painting as an act of reconciliation and acceptance'.

An afterimage is a false visual burned onto the eyes even after its source is no longer being viewed. Victor Wang, the curator of Afterimage: Dangdai Yishu (3 July–7 September 2019) at [Lisson Gall

In his 1914 neorealist manifesto, Charles Ginner rails against the 'academism' of 'weak or commercial painters,' who adopt the methods of creative artists and derive formulae from them, becoming 'Form

Just what is it that makes Liu Xiaodong's painting so different, so appealing? The fifty-year-old artist's work has been exhibited from Beijing ( Hometown Boy at UCCA in 2011) to Graz (where _The Pro

Can Contemporary Chinese art be revived as a tool for social critique? Returning to the traditional medium of painting, Liu Xiaodong, whose solo exhibition ' 25 Oil Paintings: 1993-2007 ' was up at Ya

Engaged with photography, film and painting for the past three decades, Liu Xiaodong has described his style as an 'open' one that explores thespaces between realism and abstraction. This vision is

Sign up to be notified when new artworks and exhibitions by Liu Xiaodong are added to Ocula.
Sign Up Login