Set amidst Singapore’s lush tropical greenery and iconic historical sites, Gillman Barracks is a contemporary arts cluster in the south of the bustling Asian centre. It takes its name from the colonial British military barracks in which it is based. Built in 1936, these barracks were the site of one of the British army’s last stands against the Japanese invasion during the Second World War. Named after general Sir Webb Gillman, the barracks are now occupied by leading Singapore-based and international art galleries including ShanghART Singapore and Sundaram Tagore Gallery; art organisations such as Art Outreach; and a selection of fine dining establishments.

The site is also home to the NTU Centre for Contemporary Art Singapore (NTU CCA Singapore). Robin Peckham, writing for Art-In-Sight states that NTU CCA Singapore ‘is maybe best described as a curatorial research institute and has become Singapore’s foremost hub for art among international networks.’ NTU CCA Singapore’s combination of research, education, exhibitions, and international artist residencies creates a ripple effect in the Singapore art world, breathing in a range of influences and inspirations, and exhaling new, more powerful forms. Gillman Barracks sits at the heart of this ripple, feeding from and off this creative energy.

The redevelopment of the 6.4-hectare site, which was taken over from the Singapore Armed Forces for Gillman Village in 1996, was a joint public-private undertaking between government agencies, the National Arts Council, Singapore Economic Development Board, and the JTC Corporation. With the aim of fostering cultural and intellectual exchange, and new research as well as showcasing innovative art to increase Singapore’s standing as a Southeast Asian contemporary art hub, Gillman Barracks officially launched in September 2012 with 13 galleries from 10 countries.

Prominent established and emerging artists exhibit in shows at Gillman Barracks, making it a hotspot of Singapore’s visual arts landscape. The contemporary art enclave has attracted international names such as Ai Weiwei, Yayoi Kusama, and Sebastião Salgado. In addition, Gillman Barracks creates a space for home-grown talent such as Sarah Choo Jing and Charles Lim Yi Yong, and hosts programmes such as the annual S.E.A. Focus platform. S.E.A. Focus, organised by STPI – Creative Workshop & Gallery, seeks to explore the multitude of voices in the Southeast Asian art scene. In 2017, Gillman Barracks also hosted an exhibition tied to Singapore’s participation in the Venice Biennale—Zai Kuning’s Dapunta Hyang: Transmission of Knowledge (2017) was previewed as a work-in-progress at Gillman Barracks before travelling to the 57th Venice Biennale.

What to watch out for at Gillman Barracks

Gillman Barracks will host a large number of works from the 2019 edition of the Singapore Biennale, themed Every Step In The Right Direction. Special exhibition pop-ups in Gillman by artists from Singapore, Southeast Asia and beyond, such as Constellation by Futura, Adaptations by independent gallery Supernormal and Shooting an Elephant and The Leader by Arin Rungjang also help to reinforce the precinct’s standing as a haven for contemporary art. In addition to S.E.A. Focus, Art After Dark is the flagship annual event of Gillman Barracks, held in conjunction with Singapore Art Week every January. Galleries stay open late to debut new shows amidst live music, performances, and general revelry. Together with these shows, galleries introduce additional performances or light-based installations, like Robert Zhao Renhui’s Trying to Remember a Tree (iii)—The world will surely collapse light box, which featured in the 2019 edition. 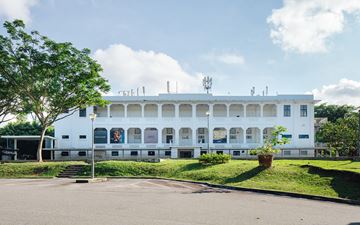 Ocula Magazine presents a selection of must-see exhibitions during the 10 th edition of Singapore Art Week.

S.E.A. Focus embraces a hybrid format for its third edition.

The sixth edition of the Singapore Biennale considers how artistic practices can 'rework the world'.

Read More Ocula Conversation Emi Eu: ‘We have to look at Southeast Asia as one market’ By Stephanie Bailey, Singapore

STPI's Emi Eu reflects on S.E.A. Focus, an STPI project platforming artists and galleries from Southeast Asia, in the wake of Art Stage's decline in 2019.

Art After Dark, a one-night fiesta at Gillman Barracks, returns on Friday with exhibitions by the arts enclave's galleries, live music, food and more till late. The biannual event off Alexandra Road

American/British photographer Karen Knorr has over the years developed a critical and playful dialogue with photography. From investigating patriarchal values of the English upper classes to the role

You can't get onto social media without encountering a GIF or two. Short for Graphical Interchange Format, these endless loops of images or soundless video are like bite-sized demands of your attentio

Set amidst Singapore's lush tropical greenery and iconic historical sites, Gillman Barracks is a contemporary arts cluster in the south of the bustling Asian centre. It takes its name from the colonia

Set in a former military barracks dating back to 1936 and surrounded by lush tropical greenery, the Gillman Barracks visual arts cluster was launched in September 2012. Gillman Barracks' vision is to