Directed by Patrick Flores, the sixth edition of the Singapore Biennale, Every Step in the Right Direction (22 November 2019–22 March 2020), brings together around 150 works by 77 artists and artist collectives from 36 countries and territories to consider how artistic practice can 'rework the world' and in turn, how a biennial exhibition might facilitate such a reworking.

In keeping, this is not a show for passive spectators. Described as a cross between a seminar, festival, workshop, and archive, Every Step in the Right Direction is a rich and dense curatorial that requires time and active engagement from its audience. Change is a group effort, after all.

At LASALLE College of the Arts, for instance, The Mamitua Saber Project consists of three artistic projects that draw on the work of sociologist Dr Mamitua Saber, co-founder of the Aga Khan Museum of Islamic Arts and the Mindanao State University, who facilitated exchanges among majority and minority populations in the southern Philippines to integrate local and traditional cultures with national and international structures. 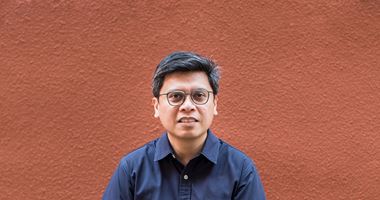 Mark Sanchez's information-heavy contribution, From Where Labor Blooms (2019), traces peasant struggles and peasant leaders in the Philippines, from Spanish colonisation to an oligarchical present, in an exhaustive accumulation of archive documents, photographs, publications, case files, and videos laid out in an arrangement that mirrors the form of a Saber diagram, two of which are pasted onto the gallery windows. They outline the 'Marginal Leader in a Culture-Conflict Situation' theory, which Saber wrote in 1957: a framework for an in-between form of leadership based on a hybrid cultural product shaped through the mediation of inter-societal relationships, 'which overcomes simplified dualisms in interacting societies'.

Saber's diagrams are context-appropriate in Singapore, given its multicultural and multilingual composition of indigenous, diasporic, and expat communities, and inform much of this Biennale's logic. Yet, this contextual reality resonates beyond the island. At the Asian Civilisations Museum, for instance, Okui Lala's three-channel video National Language Class: Our Language Proficiency (2019) draws on language policy planning and education proposals from the 1950s in Malaysia, from which Singapore separated in 1965. In a classroom setting, a cross-generational group speaks Malay, Mandarin, English, and Hokkien—a development on a 2017 version titled My Language Proficiency. 'We have various languages and backgrounds here,' Lala states in that work; 'therefore we will be interpreting and translating each other so that everyone here can understand.'

Staged across 12 locations in the city, including the Singapore Art Museum and National Museum of Singapore—where current exhibition, An Old New World (21 September 2019–29 March 2020) studies two centuries preceding the 1819 establishment of a trading post here—there is an emphasis on global perspectives emanating from Southeast Asia, with the 'restive waters surrounding the region' described as the conduit that extends and deepens the region's historical and contemporary connections with 'a wider, denser globe'.

Non-linear narratives unfold throughout the exhibition, with sources, references, formats and genres intermingling in compositions that not only cross time and space, but points of perspective and subjectivities, too. 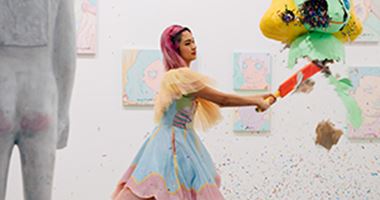 At the National Gallery Singapore, which houses the largest public collection of modern art in Southeast Asia within the former colonial-era City Hall and Supreme Court, works articulate expansive and historically rooted cartographies that have shaped contemporary states of being here and elsewhere. First up is a survey of 14 works by Carlos Villa, including My Father Walking Up Kearny Street For the First Time (1993)—feathers mounted on a door arranged to form the point of perspective of a street in San Francisco around which a Filipino community developed—and feather slippers titled Artist's Feet (1972). What follows is Paphonsak La-or's Far from Home (Meeting Place) (2019), a wall of 121 landscape paintings based on photographs of countries—including Canada, England, and Australia—where Thai and Southeast Asian individuals have moved for political reasons. 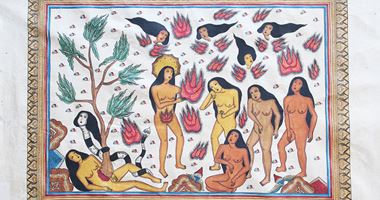 Movement is a constant theme that frames place and identity as changeable and in flux. In Vong Phaophanit and Claire Oboussier's single-channel video installation Never real historians, always near poets (2019), footage from Savannakhet in Laos and St. Denis in Paris capture the sights and sounds of both contexts, their images often splitting the screen. A narrator reads a script based on conversations with Phaophanit's family, some recalling why they fled Laos for France following regime change in 1975, and why others remained. The film opens with a question to an uncle, whom the narrator often addresses, about what place means. 'They can cut up the map, but the stories carry on moving across', is the answer.

The idea of an artwork posing an open question to its audience is a crucial lens through which to read this Biennale, which recalls the diagrams of Dr Mamitua Saber that describe the ideal leader as both product and facilitator of inter-cultural, inter-societal, and inter-structural mediation.

In keeping, Verónica Troncoso's Telling stories from outside and inside (2019) consists of stories outlining experiences of mobility and migration in Singapore printed on fabric scrolls hanging from the ceiling in one room, accompanied by annotated images on the walls. There are memories of the Cultural Revolution in China; the 1988 uprising in Myanmar and its 2008 anniversary; a father's stories of the war between Pakistan and Bangladesh—embodied testimonies that have found their way to a city where stories meet, intermingle, and create new narratives from their coagulation. 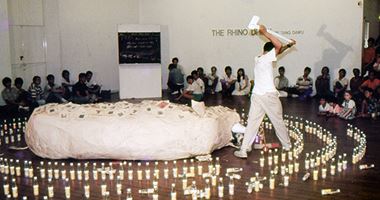 Even still, Theresa Hak Kyung Cha's Untitled (Theresa's last work) (1981) rejects the manipulation of polyphonies into a cohesive bloc. A wall of enlarged photographs that the artist took at the Metropolitan Museum of Art in New York in 1981 focus on hands culled from Mannerist, Baroque, and Renaissance paintings. Made for an exhibition that never materialised due to the artist's death in 1982, these images are positioned on either side of a silver strip crossing one wall, recalling the logic of a timeline. Nearby, an excerpt from Cha's artist statement describes 'narrative structure ... free from the more traditional linear progression', with a focus on 'Multiple Telling with Multiple Offering' instead. 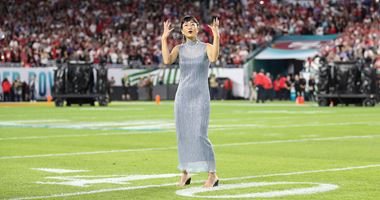 Non-linear narratives unfold throughout the exhibition, with sources, references, formats and genres intermingling in compositions that not only cross time and space, but points of perspective and subjectivities, too. Chia-Wei Hsu's two-channel video installation Stones and Elephants (2019) weaves together a story about the first British resident of colonial Singapore, William Farquhar, and his interest in zoology (and in particular, elephants); the destruction of Malacca Fort; and passages from Hikayat Abdullah, an 1849 literary work about Singapore and Malacca society at the start of the 19th century by the Malacca-born teacher and translator Abdullah Abdul al Kadir—all told over scrolling google searches and footage of a Malay Shaman in prayer.

At Gillman Barracks, Karolina Breguła's video installation Square (2018) unfolds over nine screens, each offering a different angle to a story about a Taiwanese town gripped by the mysterious presence of a sculpture hidden in a community square that sings the lyric: 'I'd like to ask you a question'.

The idea of an artwork posing an open question to its audience is a crucial lens through which to read this Biennale, which recalls the diagrams of Dr Mamitua Saber that describe the ideal leader as both product and facilitator of inter-cultural, inter-societal, and inter-structural mediation. As polarisation and accelerated crises compose a new global normal, meaningful and productive conciliation seems urgent; especially when unresolved histories continue to rupture the present. All of which recalls that open question, often repeated when so much is at stake: what is to be done? 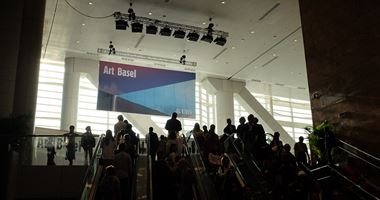 From the perspective of this Biennale, 'talk[ing] about the conditions of today and work[ing] through the difficulty to think around heterogeneity, conflict, and contradicting realities'—quoting Wendelien van Oldenborgh—seems key. At Gillman Barracks, van Oldenborgh's three-channel video installation No False Echoes (2008) explores connections between colonialist broadcasting policies designed to exclude dissenting voices in early radio connections between the Netherlands and the Dutch East Indies (now Indonesia), and the mediation of present-day debates.

Amid scenes of recital and conversation at the Apeldoorn headquarters of the main transmitter at the time, Radio Kootwijk, Dutch-Moroccan rapper Salah Edin reads 'If I Were a Dutch Man', a 1913 essay by Soewardi Soerjaningrat published in The Express, the journal of the first nationalist group in Indonesia, the Indische Partij (Indies Party). In this potent and enigmatic indictment of Dutch hypocrisy on the centennial anniversary of the Netherlands' liberation from Napoleonic rule, Soerjaningrat boldly states that if he were Dutch, he 'would not organise an independence celebration in a country where the independence of the people has been stolen.' Soerjaningrat's essay resulted in his exile and that of his Eurasian editor Ernest Douwes Dekker, a key figure in the Indonesian freedom movement and relative of Multatuli, a Dutch anticolonial author whose biography is a contradictory mix of privilege and allyship. 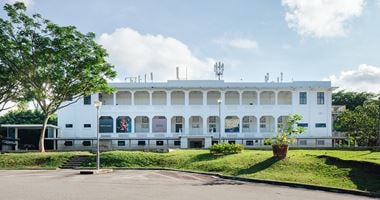 Hybrid positions are often contradictory, which is a great burden when hybridity is an inherited condition—such is the impact of colonialism's histories in the embodied present. But in Dusadee Huntrakul's The Map for the Soul to Return to the Body (2019), that hybridity runs deeper. Sixteen ceramic vessels modelled after Bronze Age pottery found at the Ban Chiang Archaeological Site in Thailand's Udon Thani province each stand on a plinth with a small plaque that spells out policies, directives, and organisations that could respond to common issues and concerns of the times, from 'Universal Healthcare', 'Universal Labor Rights', and 'Regenerative Agriculture'.

According to exhibition materials, Huntrakul's work 'bridges cultures across thousands of years, posing the questions: what constitutes humanness and what is the meaning of being human?' To collectively work from that question, this Biennale seems to suggest, is a step in the right direction. —[O] 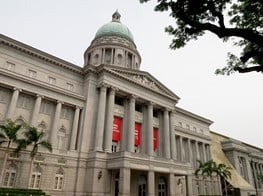 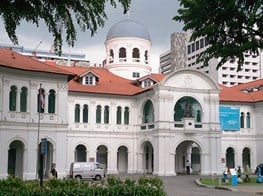 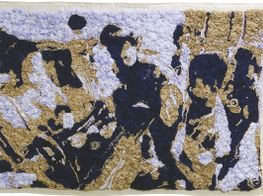 Through his practice, Chia-Wei Hsu applies narrative convention to re-present history, myth and legend in a Southeast Asian context. In doing so, Hsu acknowledges the gulf between the past and the present, and the impossibility of accurate 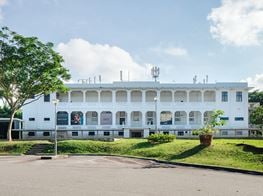 National Gallery Singapore is a new visual arts institution which oversees the largest public collection of modern art in Singapore and Southeast Asia. The Gallery is housed in two national monuments—former Supreme Court and City

'The ICA Singapore's galleries are the curatorial arms of LASALLE; while drawing on the resources of the college, they also reach outwards, creating bridgesbetween communities of artists and the public.' Melanie Pocock discusses her curatorial work within ICA Singapore.

Patrick Flores, artistic director of the 2019 Singapore Biennale, discusses the 'energies of province' that have calibrated his art historical outlook.