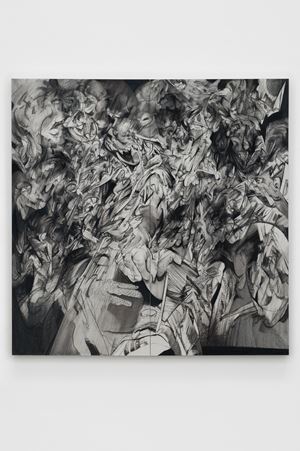 Anna ParkCan I Get in on That, 2020Charcoal on paper mounted on panel
75 x 75 inches Blum & Poe Contact Gallery 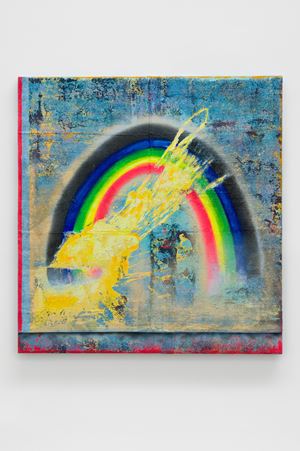 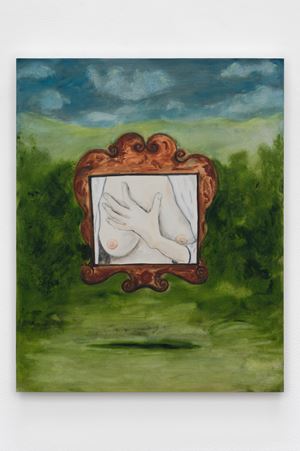 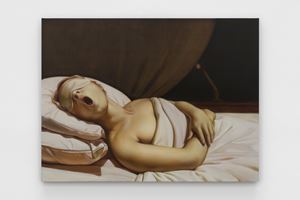 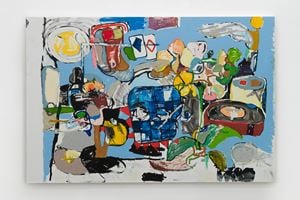 Blum & Poe is pleased to present a group exhibition entitled Sympathetic Magic with work by twenty-six artists, organised by Bill Powers. This presentation in Los Angeles follows a summer preview of the project shared on the Blum & Poe Broadcasts online platform.

I first encountered the term 'Sympathetic Magic' from the writer Glenn O'Brien, who shorthanded it to mean good voodoo. When a painting is imbued with supernatural qualities or predictive powers, such as Christians praying to an oil painting of Jesus or metal insertions made into a power figure from the Democratic Republic of Congo, we are investing in that object a measure of the otherworldly.

I remember on a tour of an AbEx show at MoMA, I once heard George Condo describe the brushstroke of a 1950s Jackson Pollock 'like a caveman scratching at the wall of his own mind.' Often we get so fixated on subject matter—but what of mood and the sillage of a painting, how it sticks in one's peripheral consciousness? The works on linen and canvas, aluminium paint, gravel, and sawdust by Rosy Keyser come to mind in such discussions—gestural, tactile paintings that summon the histories of the often-foraged materials that comprise them.

The reclamation over an image is another form of sympathetic magic we see played out on a grand stage. Consider the case of the Bates house from Alfred Hitchcock's Psycho. The director was inspired by a painting by Edward Hopper although the movie version is probably now the better-known iteration. In 2016, the artist Cornelia Parker created her own PsychoBarn on the roof of The Met, which Daniel Heidkamp now depicts with the New York City skyline behind it. In each instance, the artist attempts to assert his/her ownership of this visual in our collective imagination.

As artist Natalie Ball describes this process of permeating a work with a certain transformative power:

I started the work thinking about the songs I sang in grade school that normalised and celebrated the violence of settler colonialism i.e. 'This Land Is Your Land', and 'Columbus Sailed the Ocean Blue'. Then I switched the focus back to self-determination through narrative. It's the WAP for me. It's the Matriarchy for me. I celebrate survivance through these Power Objects using gesture and materiality to create dance staffs to dance and sing new songs with.

It might help while browsing the selections from Sympathetic Magic to inhabit a viewer's perspective from a pre-photography or at least pre-Photoshop era. Our reverence for imagery operates amidst different parameters now, compared to the mythology we previously built around symbols, the fantastical nature of the palindromic. Kathia St. Hilaire describes harnessing these lineages to manifest a psychic unfettering: 'My work stems from an African religion called Vodun which was the source of psychological liberation that enabled the Haitian Revolution. Vodun has been widely misunderstood by the world, it has been portrayed as primitive, while ignoring its rich history and complexity.' And some artists here seek to create new myths—such as Vaughn Spann's rainbow painting—the first of which he made while in Yale's MFA program as a tribute to Trayvon Martin (he only used Skittles colours for the bent stripes). On her work's mythologies, Alina Perez writes:

The Snake and the Bird, both personal and universal symbols, belong to a dance I can only witness in my imagination yet experience almost every day. The back and forth of fight or flight sits deep within the human belly, causing contradictory emotions and generations of unconscious harm. Neither good nor evil stand a chance within these drawings. The Snake can be seen as helping two Birds embrace, while at other times the Snake's triumph turns into the Birds' blissful death. Yet the Birds fight with each other, too—with beaks sharp enough to puncture any skin and any feathered belly. Altogether, a whirlwind of reaction and possibility.

Some art historians suggest that even cave paintings might be a form of sympathetic magic as shamans created vignettes on the stone walls to help manifest a bountiful hunt. Other traditions and notions connected to this memento mori have survived obsolescence in the digital age. For example, this mindset is not so distant from those of scholars who refer to science fiction as speculative fiction, because we must dream of the possibility of innovation or progress before it can be realised. All we need to look to is poetry to understand that newness is not our primary determinant to value. I share with you the words from the late painter laureate Rene Ricard, specifically the text from his 1990 painting included in the exhibition, My Name Is...

Humour is an essential ingredient in magic. When we fall prey to a knowing misdirect, we can't help but laugh at ourselves, part of the delight in witnessing such activity. Take Chloe Wise's ridiculous portrait of a woman in witch costume, her prop nose dipping into a martini glass—or Lucien Smith's painting depicting the Hollywood sign spelled as 'Hollyweed,' a dual riff on Ed Ruscha's painting of the sign as well as the intervention stunt pulled off just after New Year's Eve in 2018, blending the fictive with the factual. Art at its best is always laced with a little abracadabra.

7 new artworks have recently been added by Blum & Poe.
Sign up now to be among the first to know when new artworks are added.