Regine Schumann studied art from 1982 to 1989 at the Hochschule für Bildende Künste Braunschweig. In 1989, she became a Masters student of Roland Dörfler. From 1986 to 1994 she was a member of the artist group Freiraum, consisting in Frank Fuhrmann, Dieter Hinz, and herself. In addition to numerous scholarships (including a DAAD-scholarship for Italy in 1990 and a grant from the state of North Rhine-Westphalia for Japan in 2000) and commissions for public artworks, she received the Leo Breuer Prize in 2006. In her practice, Regine Schumann focuses on the effects of light caused by fluorescent materials. Some of the materials she uses are coloured polylight-cords and different coloured acrylic panels, which she assembles into complex colour spaces in accordance to Goethe's theory of colours. The artist also uses blacklight to complement other colours. The emphasis of her room-specific installations is the extension of the existing architecture into a dimension of vibration and–as she calls it–the configuration of a room temperature: 'The inclusion of sculptural principles as hanging, laying, arranging, conjointing, jacketing is characteristic of the work of Regine Schumann and leads towards a thinking in colours and colour spaces in a spatially experiential plasticity.' Regine Schumann describes her method of operation thusly: 'It's the material of the colored and fluorescent acrylic glass that takes an important role in my work. The material used illuminates when light energy is supplied to it, whether in the form of natural daylight or artificial light. Differently coloured plates depending on the location lead towards a candling, laying, blending, and selection of the light itself.' 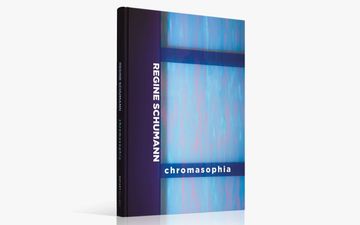 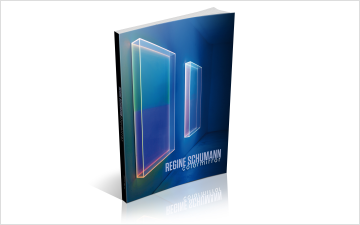