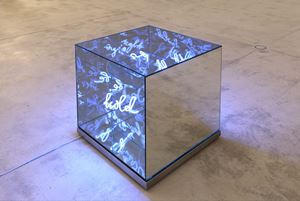 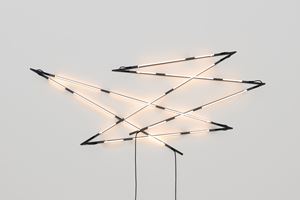 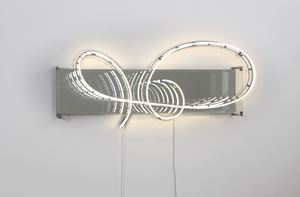 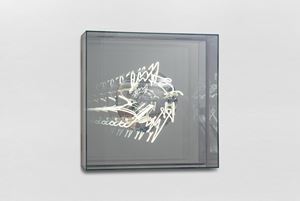 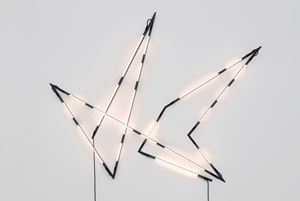 On August 3, 1984 at 10:14 a.m. the University of Karlsruhe received the first e-mail which took almost a day to arrive. It was a greeting sent from Cambridge University in in Massachusetts. In her new light installations Brigitte Kowanz zooms in on this particular date, presented here as a data trace transmitted in Morse code. As such it offers a condensed view of the evolution of our digitalised world today and the rapid transformation of our communication. It was on March 21, 1991 that computer scientist Tim Berners-Lee presented the link to the world's first webpage. Both the Internet and e-mail emerged from the extreme acceleration of data transfer, information transmission and simultaneous distancing.

In Brigitte Kowanz's exhibition the advent of the Web and receipt of the first e-mail is shown together with other crucial turning points in recent history, which have triggered radical social and political change. The introduction of the YouTube domain in February 2005, the Paris UN Climate Conference in November 2012, the attack on the editorial office of the journal Charlie Hebdo at the beginning of 2015–like a direction vector the effects of all these events radiate far into the future in both real and virtual space, while the data remain just dots on an abstract time line until they become transformed into neon objects. With the reflective background integrating the viewer, they produce new resonance by virtue of their numerical presence.

Brigitte Kowanz has long been interested in exploring the physical qualities of light, linking the medium with language and the subjective experience of object phenomena. She translates binary codes such as the Morse alphabet into neon signs, underscoring the intermedial quality of light. Time and again, she highlights its unique quality of linking space and time. In vonneuem anders, anders als es vorher war the ideas and strategies of her artistic practice are recontextualised in light of social changes. The selection of works is guided by the fact that even digitalisation is ultimately based on the circulation of knowledge and its dissolution in imagery and signs. Only through recombination, semantic recoding and new formatting does something new emerge which, too, draws on references to things that already exist.

von neuem anders, anders als es vorher war addresses, in a condensed conceptual way, the transformation of language through the Internet and mobile technologies, digital image protests and the relationship of information of memory that calls to to be examined anew. The artist is also interested in how the boundaries set by digitalisation and technology are being extended into in-between spaces where subjective perception ultimately wins the day. Kowanz's gray, seemingly monochrome images do not reveal their composition consisting of dots, lines or squares until the surface is illuminated. Geometric codes dissolve in spectral colours when the onlooker moves. Reflective textile covered with paint creates these fascinating optical sensations and yet it is the light and in particular the eye's scanning and decoding that continues to transform the material into ever new visual manifestations. Though possibly described as a constellation, what we actually see eludes a description in words. Here Brigitte Kowanz is evoking an aesthetic cosmos in which the ongoing process of situation-linked perception yields to the unambiguous transmission of information, as these codes can only be revealed in the reality of here and now.

Brigitte Kowanz, born 1957 in Vienna, lives and works in Vienna.

Sign up to be among the first to know when new exhibitions by Brigitte Kowanz or at Galerie Krinzinger open.