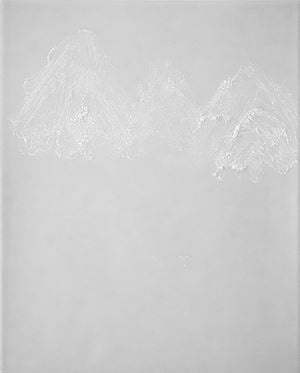 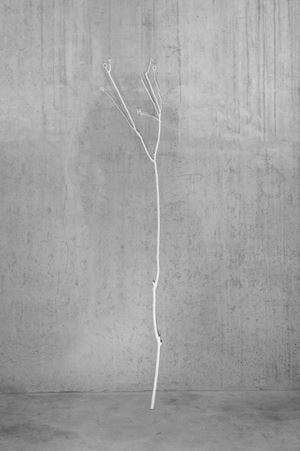 In Not Vital's art, everything is out of place, yet somehow precisely where it belongs. A bone from the South Pacific is enlarged to ten times its size in China and transformed into a sculptural barometer made from aluminium. The surreal sculpture is then filled with water before it is placed into the exhibition setting. All the countries beginning with the letter 'P' are removed from the world map and regrouped. Looking at this new and apparently perfect constellation, we wonder why these countries haven't been next to each other all along. A mountain peak from the Alpine valley of Engadin in Switzerland, Vital's homeland, is drawn in Rio de Janeiro's scorching heat, using white silicone on black foam. Never has this mountain peak looked so cool and snow-capped.

For about 50 years now, Vital has been leading an almost nomadic life that takes him from one continent to the next. His current studios are located in Sent (Switzerland), Rio de Janeiro (Brazil), and Beijing (China). Driven by an apparently insatiable desire to explore far-flung lands, their cultures and their crafts, Vital dives into new worlds with astonishing ease. Working in often remote, hard-to-access regions, he employs local artisan techniques and regional resources to undertake projects that are as mobile as he is himself: both in their visual language and their technical realisation. In cadence with Vital's itinerant way of life, his art migrates instinctively between non European and local allegories. A pinch of alchemy is all it takes for the exotic to become domesticated and for the local mundane to be transformed into something extraordinary through surreal and minimalist visual vocabulary.

Not Vital's fourth exhibition with Galerie Urs Meile poses a question for its title: 'Che fasch?' is Romansh and means 'What are you doing?'. The twenty-two works that are on display in the rooms of the gallery's Lucerne-based branch provide insight into Vital's artistic methods and practice.

Displayed next to Vital's early, large-format work Untitled (1986, mixed media on paper, 192 x 152.5 cm) which dates back to 1986, is Countries with a P (2019, stainless steel, 200 x 135 x 5 cm). While the first is a dark, abstract drawing that with its expressive quality bears witness to Vital's early years in New York, Countries with a P is a recent piece that Vital materialised at his studio in Beijing, like all his stainless steel sculptures. The eight countries whose names begin with a 'P'–Pakistan, Peru and Panama, to name three–have been assembled to form a sculptural constellation that, in its utopian ambition, mocks the arbitrary nature of the world map.

Family of Sixteen - Two Identical Twins (2017, 16 ceramic vases of varying sizes; iron table, 70 x 140 x 140 cm) is an installation consisting of sixteen ceramic vases standing in kinship on an iron table. For nearly ten years now, Vital has been producing ceramic in the historic city of Jingdezhen, situated in southeast China. While most of his ceramic works are sculptures of often monumental proportions, this piece is based on the strategy of the 'ready-made', also paying homage to the craftsmanship of the local ceramic makers: the work comprises sixteen vases that Vital found in their workshops.

4 Steps, Stronzel and Mountain (all 2018, ceramic, each 45 x 36 cm) are good examples of Vital's ability to transfigure the local and mundane: familiar symbols or Romansh expressions are transcribed into ceramic in China to appear thereafter in exhibition space as sculptural wall objects.

While Vital's works in stainless steel or even ceramic arise from a complex, protracted manual process, drawing is a swift medium that Vital often uses while traveling and to record emotions, ideas or even symbols. Sporting a hearty dose of surrealist humour, Vital creates drawings that often transcend the two-dimensional in their astonishing use of materials. Vital's works on paper incite us to see both the medium of drawing as well as the portrayed subject matters with fresh eyes: the mountain outside Vital's studio in Sent materialises in silicone on black foam; black sandpaper evokes the murky, dark ice of the Engadin's mountain lakes.

Nothing (2012, bronze with white patina, 360 x 70 x 30 cm) is a branch cast in bronze and finished with white patina. Seven letters sit perched on the branch's tips, together forming the word 'Nothing'. Nothing is perhaps Vital's best answer to the question 'Che fasch?': when someone asks him what he's doing, the artist likes to refer to the Taoist concept of wuwei, which translates as 'non-doing'. Wuwei, however, is not to be confused with inaction or idleness; it is a state of inner peace based on intuition and savoir-faire. Vital's fascination with Far Eastern philosophy illustrates quite clearly that his mobility is not only physical or geographical, but of spiritual nature as well.

Not Vital (1948) was born in the mountain village of Sent in the Engadin Valley, and is an internationally acclaimed sculptor and painter. He lives and works in Sent (Switzerland), Rio de Janeiro (Brazil) and Beijing (China). Vital is an unusual sculptor in ways, not least because he also paints, sketches and produces wonderful prints. Since the early 2000s, his practice has expanded to include buildings such as houses, schools, towers, bridges and tunnels, which blur the boundaries between art and architectures. These structures, which Vital subsumes under the self-coined term of SCARCH (Sculpture-Architecture), are often to be found in remote locations: in the Chilean Patagonia, the Brazilian Amazon, or the island of Flores in Indonesia.

Sign up to be among the first to know when new exhibitions by Not Vital or at Galerie Urs Meile open.