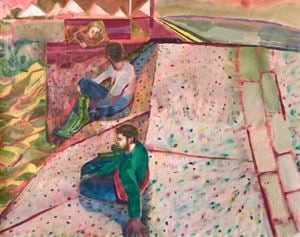 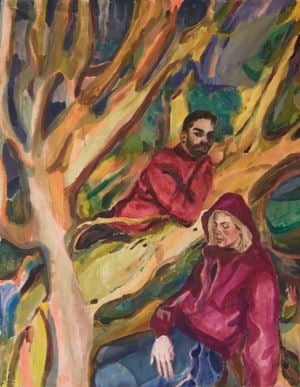 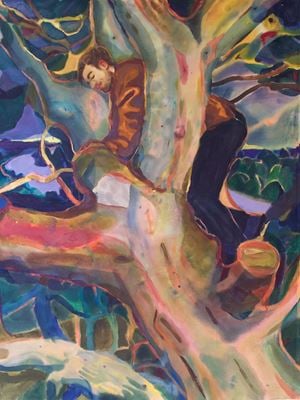 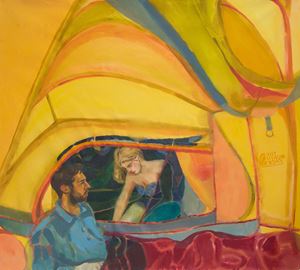 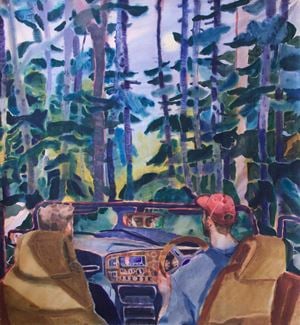 Rebecca HarperTrying to travel the spaces between us, 2019Acrylic on canvas
74.75 x 70.75 cm Huxley-Parlour Contact Gallery

These new works, all produced in 2019, build and expand on themes that Harper has explored throughout her career. The five works to be exhibited explore ideas of transience, displacement and nostalgia. Harper is interested in how we interact with the world around us, specifically connected to the ideas of displacement and alienation, and the subjects of her recent paintings are situated in what Harper describes as ‘middling space’: camping, tree climbing or mid-road trip. Although visually referencing the aesthetic of the classic British holiday snapshot, the initial wistfulness found in these scenes is disrupted by the precarious or temporary nature of the situations and settings.

Harper’s large-scale and lyrical paintings are rooted in a practice of drawing intensely from life. Harper interweaves these drawings from life with reconstructed scenes from memories, along with other mediated and second-hand imagery. Balancing both the particular and the universal, she seamlessly combines these many sources to produce plausible and richly detailed scenes that often feel dreamlike in their vivid and expressionistic colour palettes.

Born in London in 1989, Rebecca Harper studied at UWE Bristol, The Royal Drawing School and the Turps Art School. Her work has been exhibited in a number of group shows, including at Christie’s London and New York, and Bloomberg New Contemporaries 2018. She has been awarded The Michael Moritz residency Tuscany, the Modi Institute of Fine Art, India and the ACS (Artist collecting Society) Studio Prize, 2018.

Sign up to be among the first to know when new exhibitions by Rebecca Harper or at Huxley-Parlour open.