Every text, sign, and symbol can be fixed. No matter how well a painting and a poem can be made, they can also be corrected endlessly if the artist and the poet want to correct them. Like the Achilles and the tortoise paradox that a Greek philosopher, Zeno supported, a writer can fix his or her text as much as he or she wants. However, it can never be perfect even if it can be close to perfection. It can be perfect at a certain time, but it is not something that can remain unchanged beyond space and time. Also, texts in a book and those in a newspaper cannot be perfect. However, we tend to believe that they are clear because they are in cold print. I don't think that I need to talk about the content of scriptures, but a lot of poststructuralists already criticized forty years ago that fixed texts like scriptures tend to have inviolable rights. Of course, those texts are not perfectly right. A contemporary artist, Kim, Byungjoo's work of art also tells us that certain texts tend to remain unchanged although there should be no problem for them to be corrected. His installation piece, an architectural structure made of tangled lines looks like a floor plan for a building, which is why his sculptures and architectural structures seem to have a possibility that they can actually be built. People consider his artwork as both a painting and a sculpture because he makes three-dimensional art pieces, but most of them are relief sculptures and look a lot like a floor plan for a building. Art critics define the form of his artwork as 'architectural sculpture', 'installation art that features with drawing'. I also want to define his artwork as something, but I cannot find the right words to express it now. However, as an observer, I find a few interesting things in his work. His sculpture looks like a steel frame that is used for constructing a building that seems to exist in reality. It looks reasonable and solid, but what if we actually build a structure with the frame that he uses as the main medium of his work? I think that he uses a trick to examine an important issue that is called 'the tension between art and technique'. It could also be about the difference, the separation, and the integration that tend to increase or decrease in the history of art. In his artwork, he uses architecture as an example to express the tension. In the Western world, poetry and architecture were considered productive since before the Renaissance while painting and sculpture were undervalued because of a concept, Mimesis, the imitation of life. Artists strategized newly on architecture. Unlike fine art that was mostly about aesthetical aspects, which control the whole process of planning and completion, the visual meaning of architecture was neglected except the aspect of the practical use of architecture. However, he adopts the aesthetical aspect of architecture as the form of his work that is somewhat restricted because of the function of architecture. It is a paradox that what he imitates does not exist in reality although, in his artwork, he imitates the power of description with his skilled hands. In contemporary art, the manifestation of an imaginary world that is actually a trick like his case has been done very often. His artwork placed in a white space looks like part of the city because of its strong color and protruded shape. That he secures space for his artwork tells us that art is not really about technique. I don't think that it is important to judge whether he represents a building through his artwork or not. I wonder more about how different and unrealistic his artwork is from the actual architecture, which explains about the autonomy of art. The variance of art is what artists choose to fight against authority. Although the fight seems to be chaotic, he takes a strategy that allows him to harmonize with the order of the space and ignore it freely from time to time. We gaze in awe at him balancing himself on a tightrope made of straight lines and curves. (Yoon, Kewhong, Art director/ Sociology of art) 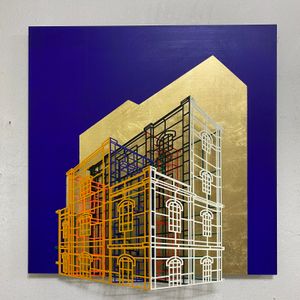 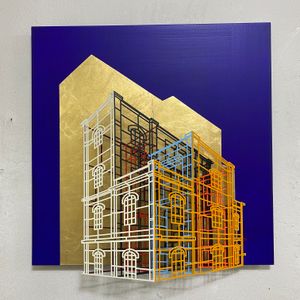 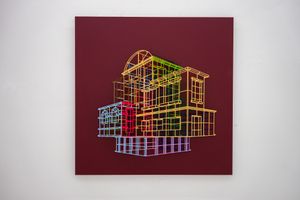 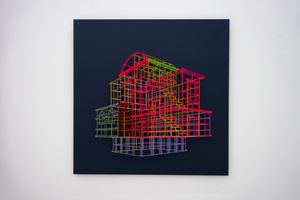 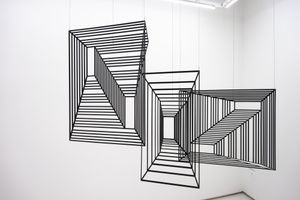 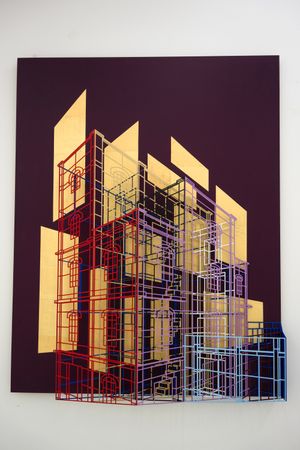 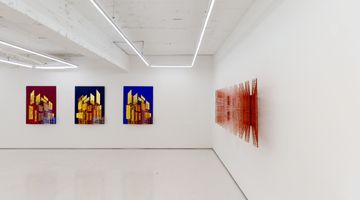 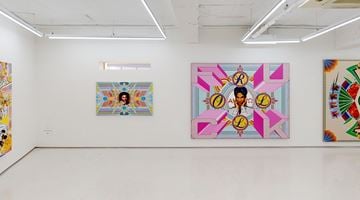 Sign up to be notified when new artworks and exhibitions by Byung Joo Kim are added to Ocula.