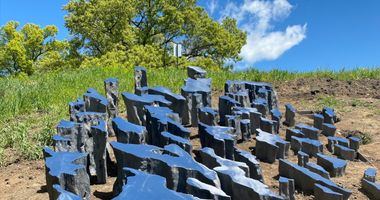 Sarah Sze is an American artist known for her intricate installations and taxonomic arrangements, both consisting of everyday objects. A fluid amalgamation of two-dimensional image, sculpture, video, installation and science, Sze's work not only challenges the convention of sculpture as a static object, but also offers a fantastical investigation into the measurement of time and space.

Sze refers to her artworks as experiments, at the centre of which exist investigations into a certain material's context or qualities. In the case of Cotissi—an installation created for Glasstress in 2017 (an official collateral event of that year's Venice Biennale)—the inquiry is into the properties of broken glass. Set in concrete, the glass shards originally set aside for recycling are both scintillating to look at and dangerous, given their jagged edges. In an earlier installation titled Stone Series (2013–5) (part of Sze's solo exhibition organised by Victoria Miro in 2015), the artist arranged a group of rocks on the floor. At first glance, the rocks appear massive and immovable; however, closer inspection reveals them to be lightweight imitations created by covering wire armature with a printed boulder pattern. On the wall, a row of canvases contains the printed textures of the rocks on display, flattening the weight and volume associated with a rock into two dimensions.

Another concern that Sze repeatedly returns to is time, as explored in Still Life with Desk and Calendar Series (both 2013–5). Still Life with Desk is a mixed-media sculpture that seems to have been frozen in a moment of disintegration; an intricate wire structure acts as a desk over which the artist has placed office-related objects including photographs, stationery, takeaway coffee cups, bottled water and potted plants. Some objects have spilled onto the floor, while more appear ready to follow. The spillage on the ground also includes silkscreen prints of newspaper front pages that, while all dated January 1, 2014, were each issued in a different location in a different time zone. In a further attempt to mark various moments in time, Sze replaces the photographs in the prints with pictures of the night sky.

Similarly centred on the passage of time, Calendar Series saw Sze collect 90 front pages of The New York Times. The artists again swapped out the newspaper's photographs, this time for images of nature such as the ocean or a snowscape. Discussing the work in an interview with Ocula Magazine in 2015, Sze recalled the questions that arose while working with time: 'How do you measure either space or time through materials or objects? What is our behaviour in doing that? ... How do we mark time not only physically, but emotionally or psychologically?'

Calendar Series—originally conceived for an exhibition at Philadelphia's Fabric Workshop and Museum in 2014—later developed an unexpected political dimension, beginning with its acceptance for the 1st Asian Biennial and the 5th Guangzhou Triennial (both 2015) in China. When Chinese authorities requested Sze remove parts of the newspaper that referenced China, the artist responded by painting over them with black acrylic. In 2016, Sze presented another revision of Calendar Series for Protest—a group exhibition at Victoria Miro in London that showcased artists whose works challenge the status quo—in which she obliterated all written content, save for references to China.

In 2016, Sze expanded her interest in ways of measuring time and space with Timekeeper, a tabletop installation that resembles a scientist's den or a writer's desk with its assemblage of objects including mirrors, lamps, stools, stones, alarm clocks with neon numerals and a metronome, among others. For this installation, the artist projected a diverse range of videos onto a myriad of surfaces, illustrating the many forms of time; the footage includes cheetahs running in slow motion, birds in flight and at rest, and water flowing. Displayed inside a darkened room, the installation was a rich landscape of fragmented and kaleidoscopic imagery.

Reminiscent of Timekeeper is Measuring Stick (2015), another tabletop installation that measures time and space through the moving image. Inspired by the film Powers of Ten (1977) by Charles and Ray Eames and its use of the factor of ten to quantify the universe, Measuring Stick combines mathematics and science with art; one of the installation's projections is a live feed of data from NASA that charts the distance between Voyager 1 and Earth.

Although she is widely recognised for her sculptures, Sze also considers drawing a significant part of her practice for its sense of immediacy and potential to develop into other mediums. Her familiarity with the two-dimensional form stems from her background in painting, graduating with a BA from Yale University in 1991 and an MFA from New York's School of Visual Arts in 1997.

Exhibiting internationally since the late 1990s, Sze has held solo and group exhibitions at Victoria Miro, London (2018, 2016, 2015, 2012, 2009, 2007); Haus der Kunst, Munich (2017); Tanya Bonakdar Gallery, New York (2015, 2014, 2010); Whitney Museum of American Art, New York (2003); Museum of Fine Arts, Boston (2002); Walker Art Center, Minneapolis (2002); and the Museum of Contemporary Art Chicago (1999) among others. She has participated in the Venice Biennale and its collateral events four times, and in 2013 she represented the United States with Triple Point—an exhibition of interrelated and immersive installations that examined the notion of the compass and our desire to find equilibrium. Her participation in other international group exhibitions includes La Biennale de Lyon (2009), Liverpool Biennial (2008), Whitney Biennial (2000) and Carnegie International (1999). Sze lives and works in New York.

View All (22)
Related Press 8 Must-See Exhibitions This Week, From Toronto to São Paulo and Beyond 3 February 2020, Surface

Construção When: Feb. 6–Mar. 21 Where: Mendes Wood DM, São Paulo What: Though this exhibition takes its name from Brazilian singer Chico Buarque’s storied 1971 song, which tells the tale of a construction worker who dies on the job, the gallery emphasises in an accompanying text that it does not intend to dwell on that troubled era of the...

The internet's utopian promise in the 1990s may have been to make the world more interconnected, but its current state has exposed the fraying that accompanies every connection. The same might be said about production and consumption, which, far from creating an efficient feedback loop, have spewed their hazardous byproducts far into the air and...

Immersing the spectator in site-specific installations that she herself compares to "studio visits," both intimate and in flux, US artist Sarah Sze combines intricate systems of objects and images across multiple mediums, from sculpture to painting, drawing, printmaking, and video. On the occasion of her first solo show in an Italian...

Read More
Related Press SARAH SZE: “HOW DO WE BREATHE LIFE INTO OBJECTS?” 24 October 2018, The Talks

Ms. Sze, is it important that your art feels alive in some way? Well, you don't know, you just hope. One of the things that's interesting is that when you put something into the world, its meaning changes over time. It means different things in different cultures, to different age groups... You put it into the world and the alive-ness of it is...

Artist Sarah Sze takes us on a kaleidoscopic journey through her work: immersive installations as tall as buildings, splashed across walls, orbiting through galleries — blurring the lines between time, memory and space. Explore how we give meaning to objects in this beautiful tour of Sze's experiential, multimedia art.

Sarah Sze discusses her installation Seamless as it is installed at Tate Modern, London, 2018.

'You're having this filmic way of reading images as they move, and you move, through space.' In this film, the artist discusses the process of creating the new site-specific works in her exhibition at Victoria Miro: Images in Debris, an installation of images, light, sound, film, and objects, that seeks to transform the visitor's perception and...

Sarah Sze discusses her sculpture Measuring Stick (2015), which explores the "measurement of time and space through the moving image." Sze remembers watching Charles and Ray Eames's Powers of Ten as a young student in the 1970s, and cites the film as an inspiration for her work. "That was something I always looked forward to...

Be among the first to know when new artworks and exhibitions by Sarah Sze are added to Ocula.
Sign UpLogin