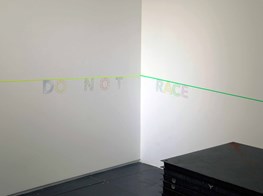 On 3 October, Christopher K Ho staged a walk-through of his solo project Aloha to the World at the Don Ho Terrace (3 October 2018 to 6 January 2019) at The Bronx Museum of the Arts. An effort to engage with identity and family lineage, Ho recreated the entrance to the Hotel Miramar—an extravagant hotel once co-owned by his grandfather in Hawaii—with a gigantic banner printed with archival images, as well as a vitrine of artefacts from the hotel, including matches, menus and postcards. The installation grappled with diasporic imaginings and cultural stereotypes, insisting that ghosts of migratory pasts should not be ignored.

If Ho locates a particular point in his family history and expands outwards, Priya Sen traces subversive yet humorous narratives in her documentary film practice by immersing herself in a working-class community of South Delhi. Her recently completed film Yeh Freedom Life was screened at non-profit space The Kitchen on 4 October, in conjunction with Chitra Ganesh's solo show Her garden, a mirror (14 September-20 October 2018). The film unravels around a beauty parlour and a cigarette counter—sites of social gathering for a constellation of women who support each other through difficult relationships. Echoing the film's title, the protagonists' defiant love for other women demonstrate their desire for freedom not tolerated by traditional family structures and social conventions. Alongside the layered soundscape of the city, Sen captures mundane gestures, flirting glances, and heart-warming conversations about sexuality as a de facto way of life.

During Open Studios on 6 October, interdisciplinary artist Bahar Behbahani informally presented her ongoing project that spans drawings, videos and objects. This series of work zooms in on the dualistic figure of Donald Wilber, an American scholar on Persian gardens who simultaneously worked as a spy for the CIA. On pages from a classified document illustrating the role Wilber played in the Iranian coup of 1953, the artist made meandering drawings that resemble patterns of flora, while her multi-layered paintings incorporate black boxes used in blocking out sensitive information in government files, as well as repeating geometric shapes found in Persian tiles. These acts of simultaneous concealment and revelation form part of Behbahani's larger practice revolving around patterns and hybrid spaces.

Queens International 2018: Volumes (7 October 2018 - 24 February 2019), the eighth iteration of the biennale exhibition presented by Queens Museum, situates the investigation of knowledge systems on a grander scale, examining the sites in which information is produced, collected and distributed—namely museums and libraries. Showcasing works from 43 artists and collectives, the sprawling exhibition underscores networked systems that structure our experience, intervening in the museum-archive itself and eliciting audience participation. Some works stand out in their site-specificity and poignancy of critique: Camille Hoffman collected discarded materials to construct an immersive landscape around the museum's relief model of New York City's water supply system, drawing out implicit connections between Colonial symbols, local history, and the environment, while Asif Mian's thermal imaging camera captured bodies of audience members and juxtaposed them against plastic clothing that vacillated on the spectrum of visibility and invisibility, highlighting the insidious intrusiveness of surveillance technologies. Other works embraced poetic modes of intimacy; mother and daughter Liz Phillips and Heidi Howard collaborated on a gigantic collage mural consisting of self-portraits, depictions of plants from Phillips' garden, and sound installation.

Concluding the week was the screening of Akram Zaatari's Her + Him (2001-12) at the Solomon R Guggenheim Museum. Based on interviews with the Armenian-Egyptian photographer Van Leo, the film is strung together by scans of the latter's commercial portraits, a rumination on the circulation of images and the irreversibility of the changing media landscape.

Whether through archival research, documentary practice or collage techniques, these artists and filmmakers situate themselves within a larger social-geographic fabric, picking out subtle strands that constitute our composite identity and cultural heritage. More importantly, as Bahar Behbahani so elegantly pointed out, history and knowledge systems are not rigid and devoid of agency; rather, they are porous, organic and interwoven with intimate narratives. —[O]

Bahar Behbahani (b. 1973 in Tehran, Iran) has a research-based practice through which she explores various cultural landscapes via painting, videos, installations, and interactive lectures. By reinventing archival materials, she questions the 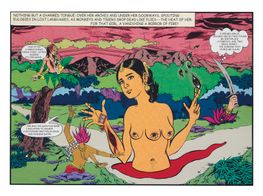 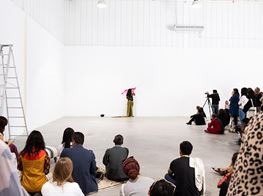