Liang Shuo was born in 1976 and graduated from the Central Academy of Fine Arts, Beijing, in 2000, majoring in sculpture. From 2002 to 2007, he taught sculpture at the Academy of Arts and Design, Tsinghua University. Between 2005 and 2006, he was an artist-in-residence at the Koninklijke Academie van Beeldende Kunsten (the Royal Academy of Art), The Hague. In 2009, he began teaching sculpture at the Central Academy of Fine Arts. In a practice that brings together a range of materials and found objects, Liang defines an approach characterised by what he terms 'scum': roughness, a reliance on processes of construction and destruction, and an interest in everyday objects. His work has been presented at major museums around the world, including the National Art Museum of China, Beijing; the National Museum of Modern and Contemporary Art, Korea, Seoul; the Singapore Art Museum; the Power Station of Art, Shanghai; the Yerba Buena Center for the Arts, San Francisco; and the Rijksakademie, Amsterdam. His solo exhibition DISTANT tantamount MOUNTAIN was held at the Staatliche Kunsthalle Baden-Baden in 2017. 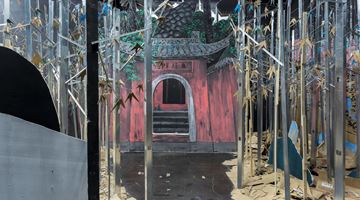