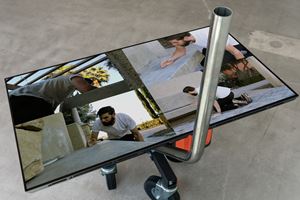 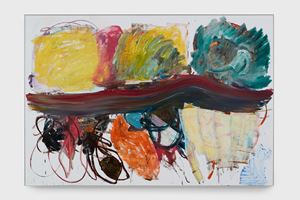 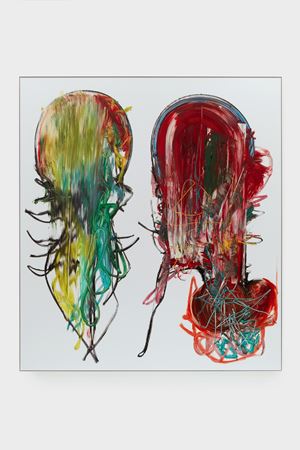 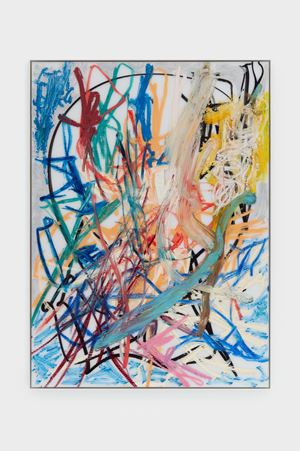 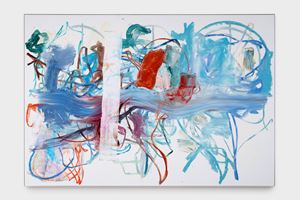 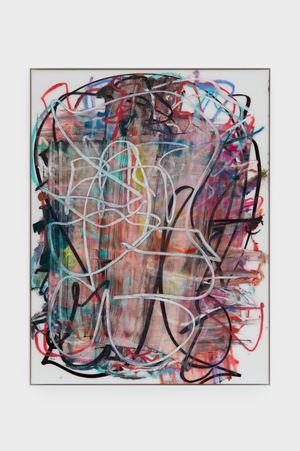 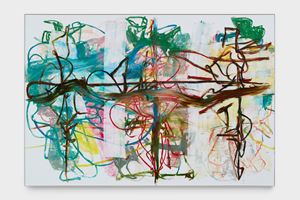 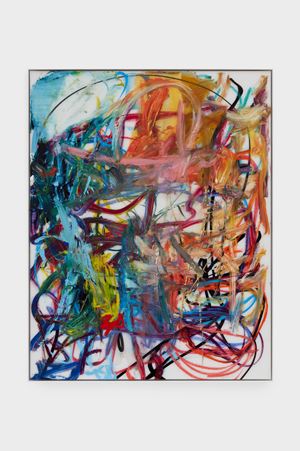 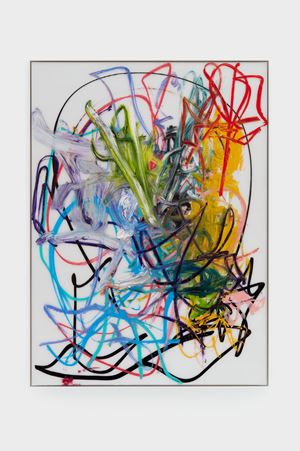 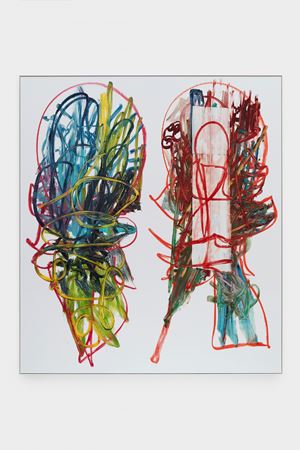 Blum & Poe is pleased to present an exhibition of new work by Los Angeles-based artist Aaron Garber-Maikovska. This is the artist's first solo exhibition with the gallery and follows the recent announcement of his representation.

4 from 3 dancers is the fourth in a series of recent exhibitions exploring a new body of work, the title referencing the generative nature of this growing oeuvre. These prior presentations were titled homebirth, POSTPARTUM, and Daughter—biographical nods to the birth of his daughter, his experience as a father, and this most recent exhibition and landmark in recognition of the arrival of a fourth family member, Garber-Maikovska's son. On view across four gallery spaces, the artist shares paintings in large and medium scale, along with new mobile video documents. A forthcoming performance will also be live streamed from the gallery's parking lot.

The abstracted, embryonic figures depicted in Garber-Maikovska's paintings communicate a visual vernacular that originates in the body and depicts something that is universal and shared. His work is integrally connected to the somatic experience, its potential for expression harnessed to extend beyond the soma and into the realms of painting. His chosen materials reiterate this deep connection to embodiment and to motion, the fluting from his bright white polypropylene surfaces acts as a metronome, a time and rhythm keeper for his mark making. The electric colour he applies with homemade oil sticks is a vehicle for his explorations of light, the translucent quality of the pigments and wax vacillating between the visible and invisible.

Executed with rhythmic gestural movements, the energy flow captured through corporal channels in this painting process exists in symbiosis with that which is expressed in his performances. Whether in a Red Robin's dining room or a Starbucks' parking lot, these guerilla performances are an affirmation of resistance in generative somatic form framed within and in opposition to corporate-mediated space. Selected video documentation of these performance works is presented in 4 from 3 dancers via three mobile structures, with horizontally mounted monitors hovering above large rolling casters. Engaging with these screens, the viewer's gaze breaks with the vertical plane of the paintings hanging on the gallery walls, positioning this facet of the artist's practice as related to but not dependent upon their presence.

Over the years Garber-Maikovska's work has been compared to various art historical predecessors but perhaps the least predictable and simultaneously most accurate would be a link to the Japanese Gutai movement, noting a shared emphasis on the relationship between body and matter in pursuit of originality. Garber-Maikovska describes the site of the body and its role in making art not simply as a tool with which to navigate our world, but 'a centralised perceptive sphere of emotional, physical, conceptual, and spiritual inquiry.'

Garber-Maikovska positions his practice in resistance to the social engineering and spatial division of a postmodern world, and as a generative force in carving space for creating freedom. This creative wheelhouse spans figuration, colour, and kinetics, but also encompasses the realms of family bonding, primal bodily transitions such as birth and death, and the action of creating space for and safe access to such values. In this vein, a portion of the proceeds from the exhibition will be donated to Kindred Space LA Birth Center, the only Black-owned Birth Center in Southern California, opening soon in South Los Angeles. From founding midwives Kimberly Durdin and Allegra Hill: 'Because #BlackBirthsMatter and so do inclusive and safe spaces for all birthing people.' Please consider joining in fundraising efforts to bring forth KSLA Birth Center, a hub for midwifery care, doula support, lactation consulting, education, support groups, enrichment, meditation and movement in Los Angeles. For more information, or to make a donation to support the centre, visit here.

Sign up to be among the first to know when new exhibitions by Aaron Garber-Maikovska or at Blum & Poe open.
Sign Up