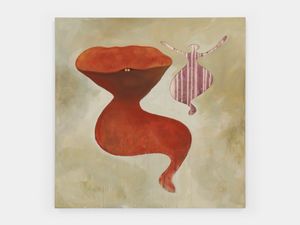 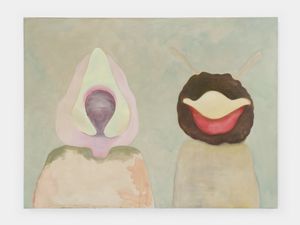 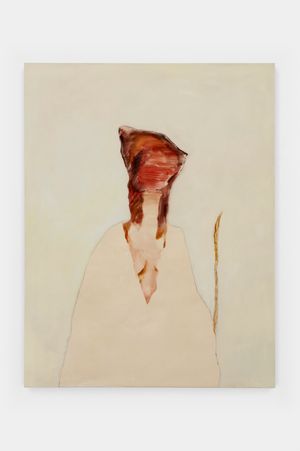 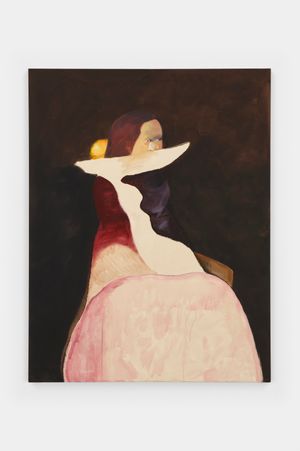 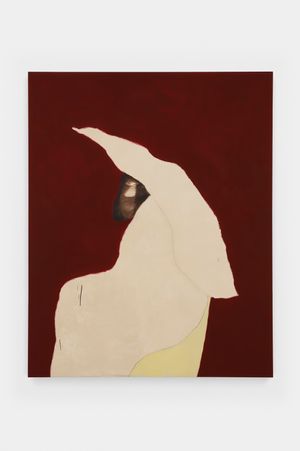 Blum & Poe is pleased to present FRESH, an exhibition of new paintings by Tokyo-based artist Tomoo Gokita. This is the artist's second solo exhibition with the gallery, and the first dedicated to his renewed engagement with painting in colour.

Whether working in greyscale or in colour, Gokita's paintings have long been characterised by their psychologically charged subject matter: uncanny portraits, disquieting still lifes, and dream-like abstractions. The cast of cultural archetypes seen in his works of the past decade—from wrestlers and starlets to dancers and bureaucrats—were initially drawn from photographs the artist found in vintage magazines and newspapers. Once immersed in the process of applying paint to canvas, he would spontaneously distort these images. In his recent paintings, however, Gokita no longer refers to printed matter: the figures and forms emerge directly from his imagination. More ethereal and amorphous than before, Gokita's supernatural figures are at once angelic and demonic, reminiscent of androids, aliens, and other undefinable chimeras. They recall the ominous creatures of sci-fi B-movies while evoking the vernaculars of Pablo Picasso, Salvador Dali, Giorgio De Chirico, Francis Bacon, and Philip Guston. This conflation of the subconscious and the conscious is mirrored in the creative process itself, in which Gokita often paints and repaints the subject, sometimes changing the orientation of the canvas mid-way through, creating both literal and psychological palimpsests of rejected, reconciled, and mutated forms.

Although Gokita is widely known for working in greyscale, colour has been a recurring feature of his practice since the beginning of his career. Some of his earliest paintings from the 2000s were landscapes and abstractions executed in the similar muted greens, yellows, and pinks seen in the current body of work. He likens this tone to faded photographs and magazine pages. At the end of the same decade, he produced a distinctive series of cloudy abstractions in blue. Gokita's return to colour in the 2020s has given him a newfound sense of liberation in his expressive range. Reflecting on this shift in his practice, the artist states, 'Miles Davis writes about not fearing change in his autobiography too. So I decided to change.'

Blum & Poe will publish a new book on Tomoo Gokita in conjunction with this exhibition. Designed by Brian Roettinger, this 272-page publication compiles dozens of Gokita's paintings amid a vast array of other imagery, ranging from casually taken Polaroids and photoshoots, to his designs for zines, T-shirts, book covers, and album covers dating back to his former career as a graphic designer. This publication features an essay by Jamieson Webster, the first to examine Gokita's images through the lens of Freudian psychoanalysis. Webster writes: 'his work, with its emphasis (at times) on realistic figuration, is made uncanny by giving it an aura of today's aggressive human relationships and the sheer fact of a culture of constant surveillance. Indeed what is uncanny is putting into his work the affective climate of the super-ego—showing that we live in a time that has pushed us to the limit of life and death. Our true aesthetic is the uncanny.'