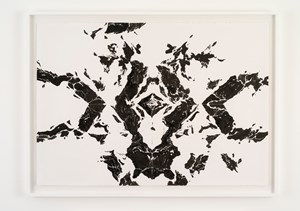 Back from his residency at Villa Medicis, Abdelkader Benchamma is exhibiting at Galerie Daniel Templon for the very first time.

Through the recurring medium of black and white murals, chosen for their simplicity and graphic power, the artist has developed a language which causes viewers to doubt their perception of reality, immersing them in unstable and dynamic universes. From enveloping moving matter at the New York Drawing Center (2015—2016) to a cave animated by a furious circular vortex for the Sharjah Biennale (2017) and a fossilised Big Bang covering the floor of the Collège des Bernadins (2018), his somewhat metaphysical installations question our relationship with the intangible, the infinite, the invisible. Inspired by literature, astrophysics, philosophy and esotericism, his work redefines classical drawing by incorporating it into installations, sculptures and murals.

For this exhibition, Abdelkader Benchamma examined neurophysiological research on the engram, a biological trace of memories in the brain. The artist created an installation for the gallery combining immersive murals and drawings, multiplying the number of layers which serve to challenge our interpretation of images and their survival. From the celestial to terrestrial, mental recollections to the materiality of marble, Abdelkader Benchamma conjures apparitions, symbols, forbidden representations and unconscious visions in an exploration of two questions: how is humanity programmed to understand images? What is belief in today’s world?

The exhibition at Galerie Templon marks a new chapter in the artist’s career, moving towards further physical density. The Engramme mural spreads throughout the gallery space and interacts with the drawings displayed on its surface. It galvanises the entire space, both with its intangible flows and marks and by anchoring the drawings’ substance in place, bedding in the lines and subjects. The piece creates a sort of moving archaeology which roots the celestial manifestations and gives us an accelerated view of drawn-out geological periods, past events that still have an impact to this day. The drawings on paper are superimposed with the mural, complementing or hiding it, and fleetingly bring form to the informal while multiplying the interpretations and temporalities of the practice of drawing, turn in turn dynamic, playing with empty space, and fossilised.

In L’image survivante (2002), a work Abdelkader Benchamma studied for this exhibition, its author Georges Didi-Huberman says: ‘We do not contemplate images as we would something which we can clearly delineate. An image is the result of movements temporarily embedded or crystalised within it. These movements that cut right across it each have a trajectory. They come from afar and continue beyond the image. They compel us to view it as an energetic or dynamic moment.’

He recently exhibited his work at the Collège des Bernadins for the 2018 Nuit Blanche all-night arts event in Paris.

Winner of the 2015 Drawing Now prize, the same year the New York Drawing Center invited him to inaugurate a mural drawing program with the Representation of Dark Matter, a monumental piece created on-site (2015—2016). In recent years, his work has been showcased by numerous solo exhibitions, including at the Centquatre in Paris (2018), BlueProject Foundation in Barcelona (2016), FRAC Auvergne in Clermont-Ferrand (2015) and Carré Sainte Anne in Montpellier (2014). Recent group exhibitions featuring his work include: Melancholia, Fondation Boghossian, Brussels (2018), On aime l’art…!, Collection agnes b., Fondation Yvon Lambert, Avignon (2017); Tamawuj, Sharjah Biennale, Sharjah (2017); The Future of a Promise, 54th Venice Biennale (2011), and Told, Untold, Retold, MATHAF, Arab Museum of Modern Art, Doha, Qatar (2010). Winner of the 1st Prix Occitanie-Médicis 2018, he spent three months in Rome on a residency at Villa Medicis from November 2018 to January 2019.

He will be unveiling a public work in June 2019 following a commission from MoCo and exhibiting at the Sérignan MRAC in autumn 2019.

Sign up to be among the first to know when new exhibitions by Abdelkader Benchamma or at Templon open.
Sign UpLogin