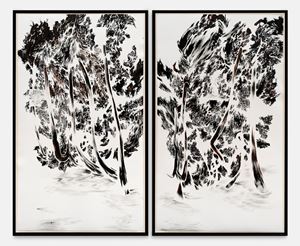 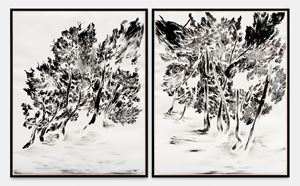 The artist is known for his use of black ink drawings, site-specific and often ephemeral, which interact and transform exhibition spaces into vast, strange landscapes, both physical and mental, shot through with subtle yet chaotic energies.

For Signs, Benchamma has taken a step away from immersive wall painting to offer a new series of drawings and paintings on paper that explore the representation of miracles and beliefs through the ages, from ancient mythology to the digital era. The infinite variety of mythological signs invites us to view and interpret the image and its status in different ways: while a sign is a mark or a script, it also, and especially, bears witness to the impossibility of reading an event in a single way.

Signs unveils two important series for the artist—Book of Miracles, Trees and Engramme—inspired from images garnered from the press, internet and art history. He is intrigued by the variety of apparitions and their representations, that occur throughout human history and the way they are transformed to reflect new technologies and beliefs. They depict angels, mysterious celestial phenomena, photographs of UFOs, trees twisted into a script representing a god's name in a unique calligraphic style, as well as the religious rituals and places of worship whose forms and meanings seemingly straddle time and space. Sources explored by Abdelkader Benchamma include the humanities, such as anthropology, as well as the so-called parasciences, such as parapsychology and magic. But hard sciences are not ignored, with astrophysics and its hypothetical parallel universes never far from his mind.

These celestial or dreamlike visions can take the form of scrap images. Often ascribed a tenuous spiritual character, they come from the realms of folklore or superstition. Reproduced until they sometimes become deformed, we find them from website to website as food for the rumour mills of the online world. The artist embraces the same principle of repetition and propagation, particularly with the series 'Book of miracles, Trees', where he offers variants on a single subject. The poetry of drawing gives them back their indefinable character, reviving the magic and mystery that had been stripped from them.

Book of Miracle, Trees[1] depicts a strange forest with a current running through it, as though it was inhabited. The trees form a sort of writing which emerges thanks to the subtle interplay of empty and full spaces. The series is inspired by a photo taken from the web. The image's author explains that the trees twisted so to recite a Koranic prayer. Taking the image of a miracle which, as so often, implicitly argues for the pre-eminence of one god over another as his starting point, Benchamma creates an animist scene where nature seems to be the only real force at work. Running through this nature are invisible, unrepresented energies, playing on the impossibility of figurative art as prohibited by Islam.

He reproduces some of these scenes in the 'Engramme' series. He began working on this collection of large format works in Rome during his residency at the Villa Medici. They give material form to the living memory, making visible the birth of images and their transformation process. Similar to paintings, the Engrammes are flung, unleashed, while remaining extremely precise, as illustrated by the layers of black ink and burnt sienna that feature in drawing after drawing. They suggest geological strata as well as substrates of the images and stories dwelling inside us. The visions float back to the surface, some of them highly realistic, others barely hinted at, like deleted or ghostly scenes.

Born in 1975 in Mazamet, France, Abdelkader Benchamma lives and works in Paris and Montpellier. He studied at the Montpellier and Paris schools of Fine Arts. After winning the Prix Drawing Now in 2015, the following year the Drawing Center in New York invited him to inaugurate a mural drawing programme with his monumental site-specific piece Representation of Dark Matter (2015–2016). The last few years have seen numerous solo exhibitions of his work, including at the POLA Museum of Art in Hakone, Japan (2019), Centquatre in Paris (2018), BlueProject Foundation in Barcelona (2016) and FRAC Auvergne (2015). Recent group exhibitions he has taken part in include: Told, Untold, Retold, MATHAF, Arab Museum of Modern Art, Doha, Qatar (2010); The Future of a Promise, 54th Venice Biennale (2011); On aime l’art…!, Collection agnes b., Fondation Yvon Lambert, Avignon (2017); Tamawuj, Sharjah Biennial, Sharjah, UAE (2017); Melancholia, Boghossian Foundation in Brussels (2018), and Collège des Bernardins in Paris (2018). He was awarded the first Prix Occitanie-Médicis in 2018 and spent three months as artist-in-residence in Rome at the Villa Medici. Following a commission from MO.CO, he unveiled a public work in Montpellier in June 2019. His work is featured at the MRAC in Sérignan (Fata Bromasa) until 20 September 2020. It will also be exhibited at a solo show held by the Collection Lambert d’Avignon from 13 February to 16 May 2021, an installation at the Power Plant in Toronto in September 2021, and Fondation Schneider in Wattwiller in June 2021.

Sign up to be among the first to know when new exhibitions by Abdelkader Benchamma or at Templon open.