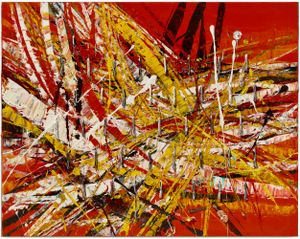 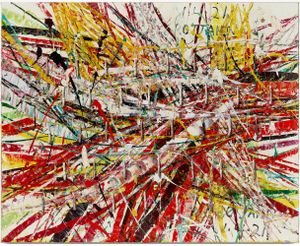 Gagosian is pleased to present Horizontals, an exhibition of new and recent paintings by Mark Grotjahn from the 'Capri' series (2016–).

In his paintings, drawings, and sculptures, Grotjahn interweaves various modes of abstraction, employing an expansive vocabulary of motifs and techniques that evolves between series, while infusing existing paradigms with new energy. Exploring colour, perspective, seriality, and the sublime, he has drawn inspiration from a diverse history of nonrepresentational painting, from prehistoric to Op art. By incorporating complex and ever-changing modes of expression into an instantly recognisable aesthetic, he continues to develop an authorial gesture that is at once mercurial and entirely his own.

Stemming from a body of work that he produced in 2016 for Casa Malaparte on the isle of Capri, Italy, the new paintings extend Grotjahn's shift away from the representational qualities of the 'Face' paintings (2003–) toward the realm of full abstraction. Inspired by the landmark modernist house of writer Curzio Malaparte (1898–1957)—isolated on a rocky outcrop on the uninhabited side of the island and immortalized in Jean-Luc Godard's Le Mépris (Contempt, 1963)—Grotjahn inaugurated the series with a group of works titled New Capri. Painted on cardboard and presented behind glass, these dynamic compositions echo the rugged natural environment of the house's setting. Untitled (New Capri XXXVI 47.47) (2016) typifies his initial approach in that it is structured around almondlike shapes derived in part from the stylised, watchful eyes in the 'Face' paintings.

In the later 'Capri' paintings, Grotjahn moves beyond this motif, conjuring multicoloured linear vertices with stylistic echoes of German Expressionism and Italian Futurism, Wassily Kandinsky and Paul Klee. These works are also marked by the influence of American Abstract Expressionism—specifically Clyfford Still's use of the palette knife. Although allusions to landscape are present in these paintings, most meaningfully they embody in abstract terms the formal and expressive possibilities of paint and process.Some of the most recent works, which adopt the landscape format primarily, also feature rolls of excess paint that Grotjahn 'harvests' with a palette knife and arranges in loose grids across the surface of the canvas. Tapering these material elements at either end to enhance their organic quality, he joins them to the support so that they rest atop clusters of vertical and horizontal strokes, providing visual and textural disruptions to the overall compositions.

Sign up to be among the first to know when new exhibitions by Mark Grotjahn or at Gagosian open.
Sign Up